It's getting hot in here, so show off your new clothes. 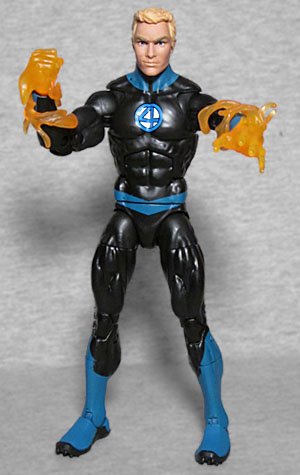 Wait, he can? I thought he just kind of covered himself with fire, not that he was fire all the way through. Like, if you had some kind of melt-proof shackles, and could get them on him, would they hold him in place or would he just kind of ooze through them unhindered?

Unlike his sister, Johnny is not fundamentally identical to the Walgreens release. [And yet you're only reviewing him on the blog anyway, you lazy butt? --ed.] And it's not just that the exclusive was fully flamed-on while this one is human, or that this one is in his modern costume - it's a different body, with the extra pec hinges,

so he can aim his flame forward, I guess.

The head is new, showing Johnny's short blond hair. Put that on a SHIELD body and you'd have a pretty good Clay Quartermain. We also get alternate fiery hands, and some flames to wrap around his forearms. So he's less a Human Torch, and more a Human Grilling Accident.

What's selling him, however, are the BAF pieces. The Build-A-Figure for this series is the Super Skrull, and Johnny has the left arms: one big and rocky, with a removable flame, and the other slender and normal. Guess we'll be able to build a regular Skrull if we want.