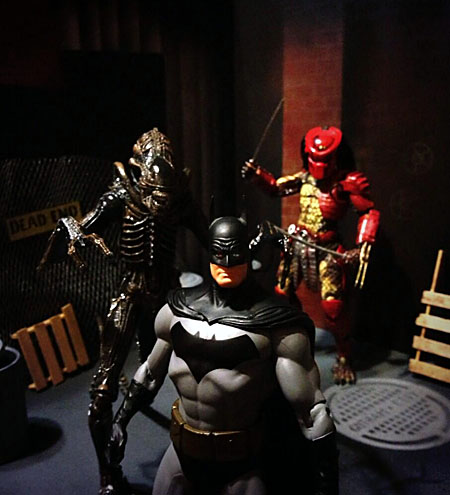 I recently had the good fortune to meet up real-life-style with a fellow OAFE, who was in town for business. Rustin Parr and I met up at a local comicshop to talk toys and whatnot, and fun times were had by all (I think anyway). During our conversations, Rustin asked if I would want him to pick up one of NECA's exclusive Albino Predator figures while he'd be at SDCC. I said I wasn't really that interested in it, which elicited this response from him: "But you're the Predator guy!"

Which made me pause for a moment and think, "Am I?" Hmmm... it definitely fell to me to review NECA's Predator figures more often than not, and I was usually their biggest defender when it came to ToY nominating and similar discussions... so I guess I was "the Predator guy." Or at least, I had been.

See, while I definitely commend NECA's efforts to release the entire Lost Tribe from the end of Predator 2, I also found myself kind of burned out by all the similar looking Predators that kept appearing every few months, seemingly without end. I enjoyed the figures, but there was a lack of freshness that began to take hold after a while. For numerous reasons, I was grateful when the final Lost Tribe figures had been produced.

So long story short, I didn't consider myself to be the Predator guy anymore. While I was definitely digging the recent injection of Dutch Schaeffers into the line, and I love the Trophy Wall diorama, I hadn't been excited about an actual Predator character figure since Big Red, and and before that I really don't remember the last Predator that I was really specifically anticipating. I loved the line, but the individual characters didn't really pop out to me, if that makes any sense.

But then came SDCC 2013. While nothing was particularly revelatory or mind-blowing in the Predator department, I still had to admire the creativity NECA decided to employ to keep the line going. In addition to much-needed updates like the P2 Elder and quirky variants like Infra-red Dutch, we also got to see how much this line was delving into and embracing the land of the Expanded Universe.

This entry was posted in addendums, commentary, NECA and tagged Predator, SDCC 2013. Bookmark the permalink.