For the most part, X-Men First Class fit within the continuity of the 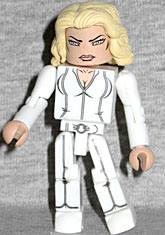 other X-Men films: there were only a few things that didn't line up (like Cyclops being alive in the early '60s), but they were minor. In fact, the biggest break with continuity was the fact that Emma Frost was an adult and not inexplicably Silver Fox's teenage sister.

Emma was played by January Jones, who's named like a Bond girl. She replaced Alice Eve, who is also named like a Bond girl, but instead went on to become famous for taking her pants off in the latest Star Trek. The figure is wearing a white Emma Peel catsuit (fitting, since that's where her name came from) that is sadly only given any detail on the front. Her face doesn't look like anybody in particular, and her hair pushes her chin down or else floats above her scalp.

Havok is, in theory, wearing the same blue and yellow jumpsuit 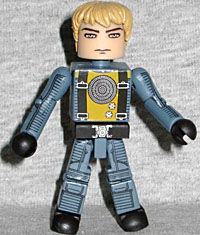 as the rest of the team, though of course his chest is painted with the concentric focusing panels that allow him to aim his energy blasts. He's missing the strap across his back, but since all the other details - the ribbing on the limbs, the air intake ports on the stomach, the big silver buckles - are painted appropriately, you're unlikely to notice.

The likeness on the Havok Minimate is just as non-existent as it was on Emma Frost. Alex Summers was played by Lucas Till, but this Minimate doesn't look at all like him - it doesn't even have the right haircut! Above the neck, this might as well be Minimate King Joffrey.

This isn't the most exciting set in the series, but neither is it the worst: neither figure may look much like the actors, but they do look like the characters, and ultimately that's what counts.