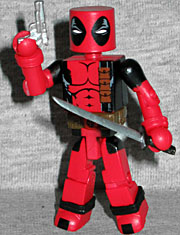 To cure his terminal lung cancer, mercenary Wade wilson attempted to obtain mutant powers artificially. However, the side effects of the procedure disfigured him and also caused psychological damage, resulting in unpredictable behavior and nonsensical monologues.

He may not be as ubiquitous as Wolverine, but there is no shortage of Deadpool Minimates. This is a totally plain DP, kind of like the one you could build with the Deadpools Assemble set, except he gets a strap painted on his chest and a belt that fits over his waist. There are grey wrinkles painted over his eyes. He's armed with two katanas and two silver pistols.

Half-man and half-demon, Dante was born from the legendary devil knight Sparda and his human wife Eva. When he was still young, his mother was killed in a demon attack. To hunt down those responsible, he became a Devil Hunter 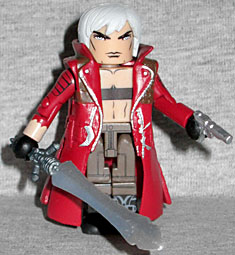 and opened the shop named "Devil May Cry."

If the Iron Man/Arthur set paired the characters because they both wear armor, then this is clearly the "wears red and black and shoots guns and uses swords" pack. Dante has the same two guns that Deadpool does, but gets his own unique sword with a huge blade and a skeletal hilt. He's got the same coat and hair as the "Player 2" prepaint, as you'd expect. The coat is very detailed, with its zippers and straps and whatnot, because apparently videogame designers in the early 2000s were raised on the comicbooks of the '90s. He's shirtless, with a brown leather strap painted on his chest that somehow manages to go both under and over his coat. Sure, okay. Both figures include display stands, though neither of them need them.