Get ready for the Age of Extinction

It's safe to say Age of Extinction is coming in not with a whimper, but with a roar!

Hasbro is probably more excited than anyone about Age of Extinction, and they're sure letting the fans know it! They were nice enough to send us a package of Age of Extinction figures, (which we'll be reviewing over the coming weeks)! 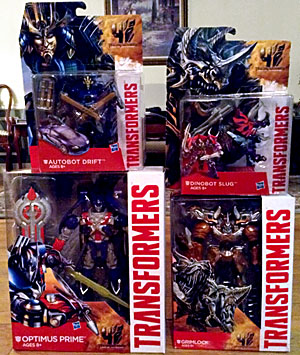 They're also showing an incredible amount of transparency regarding the development of the line: this video, for example, should give you quite the insight into how these toys were made:

On top of that, the Transformers team took time out of their busy schedules to host a Google Hangout and answered questions about the Age of Extinction toy line. It was pretty illuminating, and we'll be posting a complete summary of the Hangout soon!

But we'd be remiss if we didn't bring up "Cybertron Monday!" Yesterday, the Age of Extinction toyline was officially made available on online retailers, ahead of the release date in brick and mortar stores! They're available from all major online retailers! If you want to save yourself the trip to find them, this is definitely your chance!

(You can even get them with free shipping from Hasbro Toy Shop, using promo code FSTF4.)

After all that, you'd think we'd be done, but nope! There's also the official Age of Extinction app! This app gives you just about everything you'd want to see about AoE, including cast interviews, galleries of toy photographs and videos, character bios, and weekly in-app "missions." They'll be updating the app as we get closer to Age of Extinction's release date, so keep checking it for more information and info on how and where to purchase tickets!

You can download the app from Google Play or from iTunes.

That's all for now, but stay tuned for more info about Age of Extinction and of course, the Transformers franchise in general!

This entry was posted in Hasbro, news, videos and tagged Transformers. Bookmark the permalink.

2 Responses to Get ready for the Age of Extinction