Last month, Windblade #1 was a great introduction to the character and the TFs' new status quo, and had a hell of a hook for the next issue. Let's see if the next issue lived up to all that.

Cybertron under fire! Someone is out to kill Windblade - but discovering who means turning to some less-than-savory 'bots. Can Windblade trust 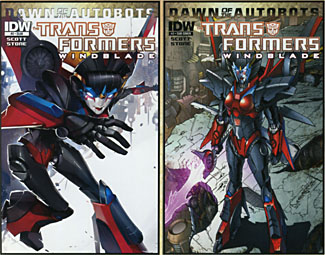 her informants enough to stake her life on them? And who will she turn to when the events of Dark Cybertron come back to haunt them all?

After a one-page recap and a page of introductory headshots, the story picks up right where we left off last month - in fact, it picks up a few minutes before, getting to see the scene that ended issue #1 from a different angle. Windblade continues her investigation into what's wrong with Metroplex, while counting on her bodyguard Chromia to watch her back while she does it. The mystery begins to become clear. Eventually she discovers that the biggest annoyances can also be the best assets, if the situation calls for it.

Writer Mairghread Scott keeps the action moving at a crisp pace. The scenes aren't rushed, but neither do we linger any one place long enough to get bored with seeing it. Like a lot of fictional investigations (real-world ones, too), there's a bit of running in circles, but it's not repetitious; multiple scenes set in a single place still have different feelings based on the attitudes and actions of the characters who are there (even if those characters repeat, as well).

There is one particular scene where the writing 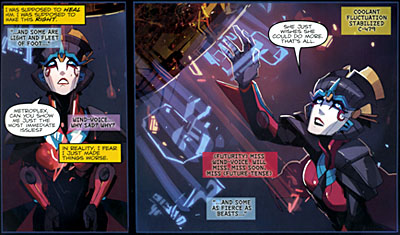 is confusing, but even that is done with a purpose. Last issue, we learned that a titan like Metroplex doesn't speak with one voice, but with many - so when we go into his head, it's naturally going to be difficult to follow all the different threads at once. Our tip? When you get to that scene, read it through once normally (i.e., text block by text block), then re-reread it once for each color-coded conversational stream, then read it normally again - it really will help your mind snap everything into place as it comes.

Windblade is still an outsider on Cybertron and she knows it. However, that does offer a meta-textual benefit to the story (as opposed to a practical benefit to the plot): Windblade can react to characters the way readers would react to them, rather than the way other characters would. I know that's a bit confusing, but without spoiling anything, think about the Roadrunner cartoons: if you watch enough of them, you start to wish Wile E. Coyote would successfully catch him, right? Windblade is the character who would be in the cartoon and still root for Wile E., not against him. 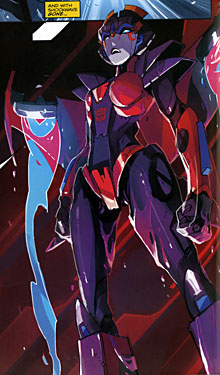 She's an outsider, so she's free to think like us.

(I do still believe Windblade is wrong about who she thinks is behind everything: any good mystery needs a red herring, and so far her suspects seem to have come too easily [and are too blatantly suspicious]. Of course, we're only two issues in - maybe this is a story that's less about whodunnit and more about gathering the proof that they did. We'll have to see.)

Sarah Stone's art continues to be a wonderful fit to the tone of the writing. It's slightly cartoony, allowing for heightened expressiveness, but grounded enough to keep it from looking like a joke. There's one particular shot of Windblade in robot mode using her rotors to hover, that's absolutely fricking majestic! 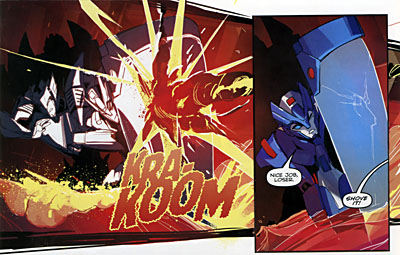 The panel layouts remain mostly straight - and even when the borders do tilt, the lines are still strong and solid. There are only a few moments where this rule is broken, and it's always in service of the story - if you've got a highly dynamic scene where (robo-)adrenaline would be pumping, jagged borders make sense, pulling us in to the middle of the hectic action rather than presenting it to us on a platter. 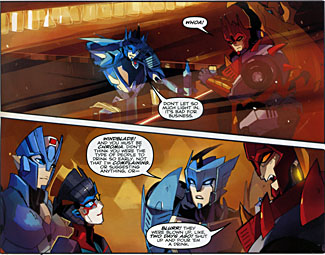 The colors remain excellent, serving the mood of the story. A sterile med bay looks entirely different from a dingy watering hole, and a monitor-illuminated workstation is a different kind of dark than the deep, hidden interior of the city. Plus, there's a neat bit with Chromia's energy weapons fading in as she turns them on - you can almost hear them snapping on like a lightsaber!

Just like last month, the book ends with a total "oh crap" moment, hooking you for issue #3. Two months in, Transformers: Windblade is still a winner, and it's going to be interesting to see where the story goes next month.