When Basin City police detective John Hartigan saved young Nancy Callahan from her kidnapper, he made an enemy of the man's father, the powerful Senator Roark. Framed for the crime and sent to prison for eight years, Hartigan came out to find Nancy all grown up, and hunted by someone Hartigan didn't recognize, but would never forget. Who is that Yellow Bastard? 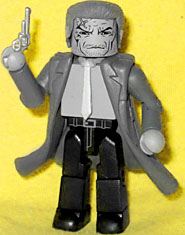 Look, it's another Bruce Willis Minimate, but this one has hair! And about a thousand tiny lines painted on his face, because Hartigan is the quintessential grizzled old cop. So much so, it's surprising that Clint Eastwood didn't play him in the movie. The important part is the X scar on his forehead, but his stubble is nice, too. Since the most traditional look for Hartigan involves his coat billowing in the wind, the Minimate gets a coat that does just that. He's armed with a small silver revolver, because why wouldn't he be? 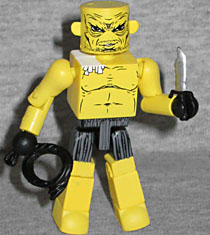 Naturally, this wouldn't be much of a that Yellow Bastard set without that Yellow Bastard, and the Yellow Bastard wouldn't be much of a Yellow Bastard if he was done in grayscale - thus, he's the only figure in this set to be in color. He's wearing grey boxer shorts and black gloves, but otherwise it's just yellow skin (well, there's also a white bandage on his shoulder, but that's not clothing). He gets a new head, with large, molded ears - he would have been recognizable without them, but kudos to AA for thinking to add them. His facial hair is a bit heavy, but the bags under his eyes are great. He's armed with a coiled whip and a new knife that matches the one from the film. 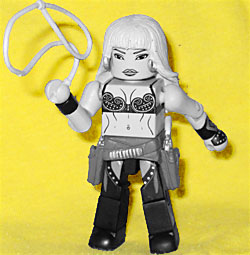 Up next we have grown-up Nancy Callahan in her cowgirl stripper outfit. This is a good time to remind everyone that John Byrne thinks Latinas with blonde hair look like whores, and he doesn't seem like the type of guy who would make a distinction between dancers and hookers, so he probably thought Jessica Alba was perfect casting. She's got two white-handled pistols that fit (extremely loosely) in the holsters on her crossed gunbelts, and a lasso. The costume details are painted well - silver studs on her bra and gloves, and light fringe on her chaps. Her hair is a new piece, molded with large hoop earrings. 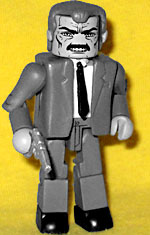 The final figure in the set is Senator Roark, a plain old dude in a plain suit. He's wearing a suit jacket and has the same tie that Hartigan was wearing. As far as capturing the look of Powers Boothe, the mustache does a lot of the work. His hairline may be receding, but the hair is still thick. He has strong cheekbones, a few wrinkles on his forehead, and he may not be smiling, but he's definitely showing his teeth. The set includes a gun that could work for either Roark or his son, but since Junior's hands are already full, you might as well give it to daddy.

This is a terrific four-pack: it covers all the important characters of the story, and doesn't leave anyone out. If they wanted to, Art Asylum could supplement this with a two-pack of Hartigan's partner Bob and a "first appearance" Junior, but even if these four are all we get, the story is sufficiently covered.