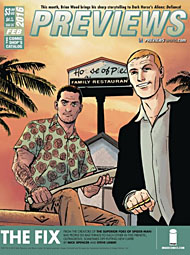 Taking a cue from all those bootleg Chinese auctions, DCD is offering a set of six Rainbow Batmen on page 154.

And page 155 is resoliciting the Static Shock action figure.

They're also re-releasing the BtAS Batmobile, with figures and a bat signal this time.

There's going to be a Madballs comic. See page 388 if you don't believe us.

Speaking of weird things, page 486 has a self-help book from He-Man.

There's a new series of Alien Minimates on page 520, and Predator and BTTF on page 523.

NECA is all over page 532, with Aliens Series 7, the red Queen, and their new Cinemachines.

Mezco has a set of three Batman Returns Mez-Itz on page 533 - Batman, Catwoman and Penguin.

The new series of Captain America Marvel Legends is listed on page 534.

The massive Funko section runs from page 535 to 542, and includes Pop!s, Mystery Minis, and more. Including Five Nights at Freddy's!

There's a ton of stuff on page 544! Marvel Universe, Masters of the Universe, and Pacific Rim, all together!

Page 550 has Mezco's 14" Thundercats toys, plus some Transformers that also spill over to 551.

NECA has Heroes of the Storm and Contra figs on page 552.

Hey, apparently there are going to be Lupin III Figuarts! Page 598.