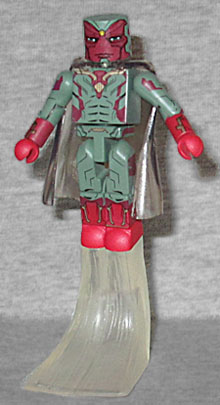 The android Vision was intended for Ultron's use before it housed Tony Stark's artificial intelligence, JARVIS. It can fly and phase through matter, and fights with Iron Man.

Wait, "it" can fly? Are we not referring to Vision as a "he"? You should join Cap's side, Vihz: he'd treat you with the respect you deserve. This figure is functionally identical to the Vision Minimate from Avengers 2: The Legend of Curly's Gold - one I never got, so I'm glad to see it reused here. There are very complicated paint apps on the body (green-grey and red, which is at least partially right, unlike all the "gray and purple" merchandise the last movie had). His cape is especially nice, a smoky translucent piece with a yellow circuitry pattern tampographed on it. The only difference between this figure and the previous version is the face: he's got more lines now.

A former S.H.I.E.L.D. operative, master archer Clint Barton was compelled to do criminal acts by the Mind Gem, but has since cleared his name. He sides 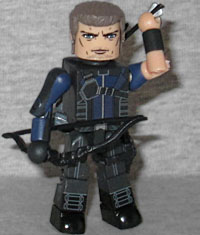 As do all right-thinking people. Hawkeye's really leaning heavily on his SHIELD past for this new costume, and coincidentally also color-coding which team he's on. He's dressed in blue and black, which kind of makes it look like he stole Tony Stark's racing suit. There's a bit of bare skin on the left arm, while the right is completely covered. He has a stern look on his face, and some stubble. The set includes his bow (which is too thick for a Minimate hand to hold, really), plus three arrows that can fit in his quiver and a pistol for the holster on his leg. This TЯU-exclusive set also has a two-footed flight stand that's probably meant for Vision, but could easily be used to have Hawkeye jumping to the attack as well.