As promised in today's review, here's the HorrorHound's backstory, as presented on the Creatureplica website:

A young American soldier named Harold Warren infiltrates Nazi Germany in 1944 with a secret mission to assassinate the Führer Adolf Hitler. The second world war seems to be coming to a close, thanks to the Allied Forces, while Hitler's Germany became increasingly desperate as they turned to the occult and bizarre experiments as a last ditch effort to win the war.

The ill-fated US trooper's mission is a failure as he is captured by SS officers deep behind enemy lines. 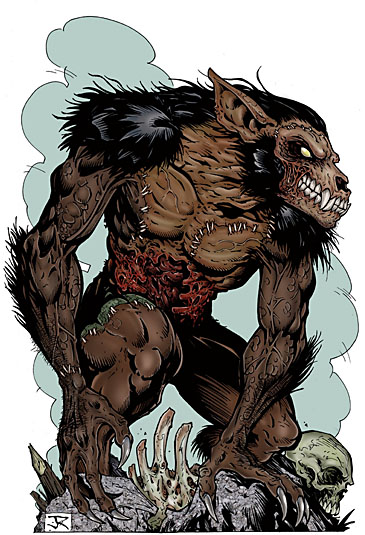 Now in the hands of several diabolical Nazi doctors he is subjected to sadistic medical and occult experimentation before he succumbs to the several treatments, surgeries, and mutations intended to transform him into a supernatural killing machine.

Soon after Harold's death, his body is discovered and retrieved by US Army officers - found stitched together, mutilated and strapped to a table within the bombed out underground laboratory. His butchered body is shipped home for study, however, soon disappears from the infamous Wright-Patterson Air Force Base upon the first full moon.

For decades since, sightings of a large mutilated dog-like zombie creature have been reported miles away in the Mount Airy forest area of Hamilton, Ohio. A believed haunted part of Mt. Airy known as the Twin Tunnels has played host to the largest amount of reported sightings, as well as a twisty stretch of road known as the Devils Backbone. Could this creature be the lost soldier transformed? Could the Nazi experiments have worked? One thing is known for sure - the Cincinnati area is home to the infamous creature known as the HorrorHound, pray you never cross his path for it might be the last time you do.

Now you know. Sounds like something Hellboy would run into, doesn't it?

This entry was posted in addendums and tagged Creatureplica, Hellboy. Bookmark the permalink.