Alison Blaire is a light-generating mutant who has been a singer, 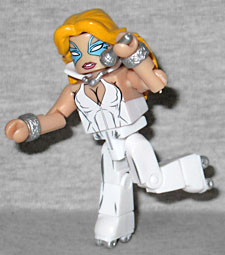 actress and X-Man. In the region of Arcadia, she is a member of the team A-Force.

We already had the '80s and '90s versions of Dazzler, so why not the '70s version, too? Sure, this figure is based on a Secret Wars tie-in, but the costume is the same. She has long flowing hair that's shaped to fit over her new collar (which has her disco ball medallion molded as part of it). Her white jumpsuit is painted with black anatomical detailing and she has silver bracelets and a microphone, but the coolest thing is that she's wearing Minimate rollerskates! Taking a cue from some of the Lego Minifigs (e.g. Derby Girl), Dazzler has skates that fit into her feet. They stay in place well, but can be removed. I do wish she had some color for her shoes, though - in the comic, they're as mirrored as her necklace.

An alien trapped on Earth, Howard the Duck works as a private investigator,

in New York City, and shares a building with She-Hulk.

While these sets are ostensibly based on Secret Wars, Howard the Duck didn't appear in Secret Wars - at least, not like this. There was a book called Howard the Human, which was set in an entire world of anthropomorphic animals, but this Minimate is the modern take on everybody's favorite* anatine. The head is new, molded in the typical Minimate shape but with his beak and fedora done as part of it. Fun! He has the same small torso as Lock, Shock and Barrel, and the child arms, but instead of tiny legs, his legs are made from arms. You know, rounded, to better look like duck legs. With sculpted flippers! He even has a special stand with a smaller peg.

This set is a weird throwback, with the queen of disco and a character best known for a rotten egg of a movie, but the new piece created for the figures and the general design work that went into both of them makes it the series' big winner.