Last year, we showed you the cancelled Series 5, 6 and 7 of Jakks Pacific's SLUG Zombies. Today, in honor of our review of Series 1, we've got something else entirely.

You may recall that "S.L.U.G." is an acronym for Scary Little Ugly Guys, and that the plan was to eventually expand beyond just zombies. Not much progress was made, but take a look at where things were going: 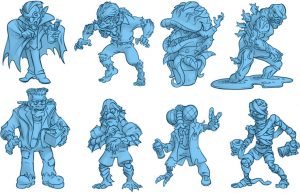 A vampire with a Bloody Mary, a werewolf with a bone in his mouth, Audrey II, Swamp Thing, Frankenstein with a car battery, a Gill-man who's afraid of water, the Fly, and a toilet paper mummy.

The Hunters are based on Buffy, Van Helsing (with Wolverine hair, appropriately enough), a Ghostbuster and one of the Frog Brothers from Lost Boys. Which brings us to why the SLUG line was cancelled: some of the designs were so close to existing characters that the companies who had paid for licenses on the real things began to complain; rather than risk getting sued, Jakks decided to retire the line.

All the SLUG Zombies were designed by John Rauschelbach, and he did the art for the SLUG Monsters and SLUG Aliens, as well. The Monsters would have been blue (as opposed to the zombies' green), while the Hunters would have remained pink. The Aliens would have been purple. They hadn't quite cracked the style of the Aliens when work was abandoned, because the potential for pop culture references wasn't really there. 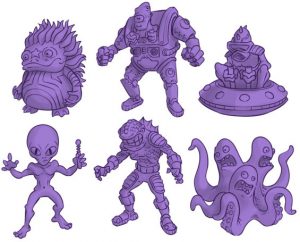 Given time and work, the aliens might have turned out well, but the loss of the monsters is especially keenly felt.