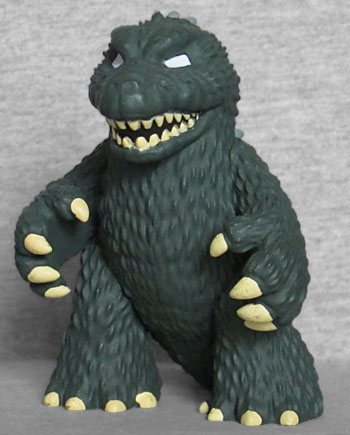 came out, I wasn't very interested in the Alien Queen, but she was a big, heavy figure, so I found her while I was trying to shake my way to Godzooky, here. It was pure luck that finally landed him in my collection - even at a 1:24 ratio (thus available in every other case), it took a lot of searching to not get a Queen.

The idea is probably to create a generic representation of the concept of Godzilla, rather than a chibi-fied version of any specific suit, but if we had to guess, we'd say he looks most like 84Goji, from 1984's Return of Godzilla - sure, the neck may be a little short, but if he was going to be any of the '90s Godzillae, he'd have to have little ears on the sides of his head. And none of the suits before '84 had four toes. 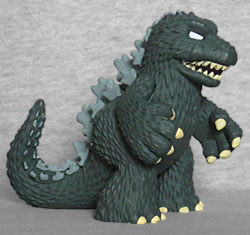 Godzilla stands 2⅞" tall, but is more than 3⅜" long - after all, he has a long tail to drag around behind him. The texture of his scaly, scarred skin is achieved by little lines of clay running all along the surface. His eyes are blank white, because that's the Mystery Minis style, but his claws are pale yellow and his dorsal fins are gray.

If you want a nice, plain Godzilla figure without needing to worry about specifics of design (that is, if you're a casual fan, rather than a die-hard), this little monster is a terrific choice.