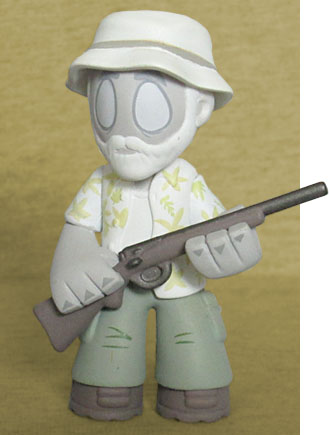 For our second "In Memorium" review, we turn to a figure that proves that not everyone in this series will be a beloved character who turned into a zombie - some will just be beloved characters who died a gruesome, painful, prolonged death!

was that the farmer wore suspenders while the guy with the Winnebago wore a floppy hat. Thanks for codifying yourselves better than the comic ever did, guys! This Mini gets the right accoutrements, dressing Dale in said hat, plus a Hawaiian shirt, greenish pants, and dark boots. It's hard to identify the specific colors, since the In Memorium figs are all desaturated, though they're not quite to pure grayscale territory yet. He has painted fingernails, plus wrinkles on his pants, and he's holding his rifle - for this to really and truly represent the situation in which he dies, the gun should have a scope on it, but allowances must be made. Also, the beard on the toy is a lot fuller than it ever was on the actor, but I guess there's no way to sculpt "thick scruff" - at least, not in this semi-animated style.