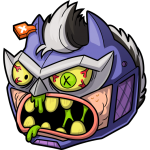 Skunkvenger is here to save the day! Armed with super stench and rabid enthusiasm, he's sure to scare off any crooks... and anyone with a sense of smell. 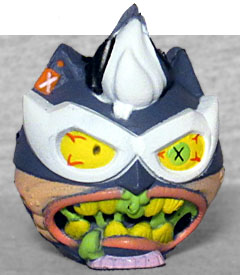 Skunkvenger is one of the new characters introduced for this incarnation of the property - Madballs may have had a Marvel comic in the '80s, but they've never had a superhero parody before. It really speaks to the prominence superheroes have in the culture right now that, in a line and a brand that's all about nothing but gross-out monsters, Just Play considers it enough to just create a generic comic-style character with a runny nose and a funny name.

Skunkvenger is vaguely patterned after Batman - not just the fact that he's an animal-themed vigilante, but the style of his mask. It's blocky and angular, like

Christian Bale's batsuit, with a pointy nose and little ears up on top of the head, and even a protective pad under the chin. His right ear has an orange tag in it, like he was captured in the wild and then released so scientists could study him. The mask is purple, with another white mask on top of it around the eyes, and some quilting(?) on the back of the neck. What, from the front, appeared to be a typical superheroic poof of hair, turns out to be his skunk tail, curling all the way up his back. So cute! We really have to thank Just Play for not trying to pull a "Stinkor" and make the Madball smell bad in real life.