Need someone to do the dirty work? Great news: that's his favorite kind of work.

Boy, two Deadpools in this Deadpool Legends series, and they both only warrant quick blog reviews! Poor guy can't get any respect!

This figure shows Wade in his X-Force uniform, which we've seen before, but this toy is better than that one. Six years ago, Hasbro was still using their bad copies of ToyBiz's Bullseye body, while these days Hasbro uses something better. Still, this is basically the X-Men Legends 2 Deadpool painted gray.

It's not even a good shade - like, the color

they chose for him is more of a pale blue than an actual gray, so he doesn't look like he belongs with the rest of the team. Heck, the belts he's wearing are closer to the color his uniform should be than the uniform is! His only spots of color are his belt buckle and his eyes - all red, naturally.

The head, harness, and thigh holster all come from

the XML2 figure, while his belt is a different style and he has straps round his wrists and ankles rather than protective guards. He comes with two swords, which are curved rather than straight - it's a good thing his scabbards are PVC, or they'd never fit. He's armed with a pistol and the odd rectangular gun from last time. They both get bright blue paint apps for some reason, and the pistol even has an orange tip, 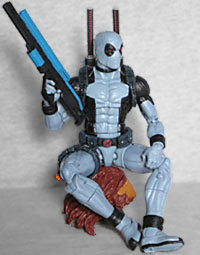 to make it look fake. That seems like something Deadpool would find funny.

Unlike the Classic Deadpool in this series, X-Force Deadpool gets a piece of the Build-A-Figure: Sasquatch's head.

The odds are very good that you were unable to get the previous X-Force Deadpool, but even if you did, this toy's better. The color they chose to paint him is weird, though.