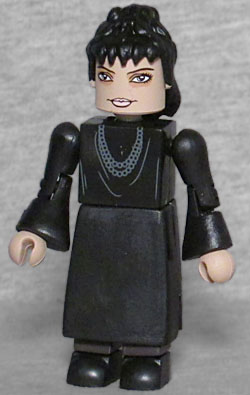 Daughter Lydia Deetz comes across the Handbook for the Recently Deceased, and realizes that not only is the house haunted, but she is the only one who can see them.

Lydia was the hero for every gothy girl before Death came along, what with her dark clothes and her performative sadness. This Minimate shows her in her usual black "creeping around the house" dress, not her "going outside" outfit - shame, because they totally could have given her extra pieces to switch between the two. It really would have only taken a big hat and the existing camera accessory. And since her bio mentions the Handbook for the Recently Diseased, why doesn't she come with that? Why don't any of the figures in this series come with that? 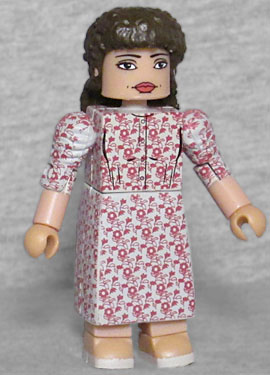 When the Maitlands die in a freak accident, their spirits are bound to where they lived, and they are forced to watch the Deetz family destroy their dream house.

Boy, the Winona Ryder likeness on Lydia was only so-so, but this Geena Davis is spot on! Between this figure and the various Samuel L. Jacksons, you can finally make some Long Kiss Goodnight action figures! It's about time! Unlike the Mystery Mini, this Barbara is wearing her proper dress: pale gray with a pink floral pattern all over it. Now, the pattern is very obviously a single art asset Ctrl-C'd and Ctrl-V'd over and over, creating visible stripes where the flowers repeat - a stripe is a stripe, even if it's been rotated 15° counterclockwise.

Like her husband, Barbara gets an alternate head to show her in "haunted" mode - unfortunately, hers does not work as well as his did. She's got the gaping mouth

with her eyes resting on the back of her tongue, but for some reason, the designers really wanted to hold onto that traditional Minimate head-shape, so instead of continuing smoothly into the hairline, the mouth dead-ends against the "face," leaving a flat stretch of head behind it. Doing it the other way would have allowed for more depth in the sculpt, too, while still retaining enough space for the neck's balljoint to plug in. This way ends up making the alternate head look too small compared to the rest of her body. This head is... okay? Minimally acceptable? Something. It could definitely have been a lot better.