This is kind of an interesting series. It both seems to have specific themes within it (Fantasy, Modern World, Space) rather than the more typical mish-mash, and it includes Imaginext's very first straight-up remake of one of Mattel's classic figures from several years ago! 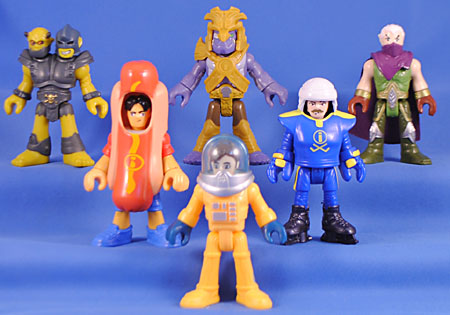 Series 10's packaging features a pink background, which is surprisingly similar to the Series 6 coloring. The character arrangement is kind of weird as they've once again placed characters to blend in with their surrounding colors (yellow Astronaut on yellow background and pink Hot Dog on pink background), but by this point I'm used to it with these packages. Similar to the background color scheme, the silhouettes on the back fade from yellow on the bottom to pink on the top (I really do like the color fades for these silhouettes rather than the solid colors) which turns out to homage an homage IN the series! The accessory silhouette is of the alien animal that comes with the Spaceman and this color fade on the package matches almost exactly the same effect on the actual toy. That's some extra meta design work there, Mattel! As always, I've included each figure's number code below, which can be found stamped on the top left corner of the back of each package - ensuring you get the figure/s you actually want! 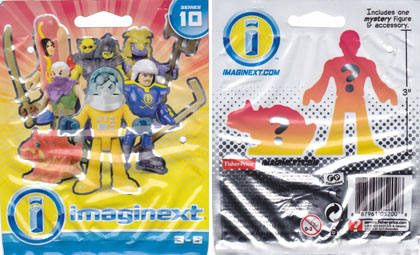 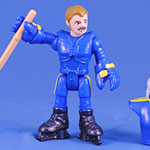 First up is a fun little hockey guy. He's blue with yellow accents, basically an inversion of Imaginext's signature colors. He's got an all new sculpt and it's really quite good. Nicely detailed and proportioned, and it seems to pretty accurately get the look of (what little I know about) Hockey players' gear. They gave him skates, and the blades do include rounded pegholes under the heels of the boots, which also help stabilize him. I really like the torso because he's wearing pads which both looks cool (could be fun for some interesting repaints down the road) and is a really nice bit of realism since one of his accessories is effectively his jersey - and the pads are worn under the jersey! The jersey piece is appropriately smooth and includes the helmet as part of the sculpt. The Imaginext "i" logo is used for his team insignia on the front, which is kind of fun, but he doesn't have a name or number of the back. He also gets a hockey stick, but only the top of it is rounded to fit his hand's grip. My favorite part of him is the head, it's very classic '70s/'80s hockey player, with sculpted sideburns and a printed mustache and mouth with a few missing teeth. I like this guy much more than I expected too, but I'd be lying if I said he wasn't too blue. 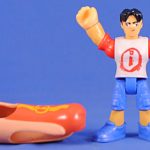 Like Series 6's Chicken guy, this is a fun idea but not a great execution. The figure is kinda generic (and kinda familiar - is he an homage?) that reuses the torso and arms from Series 1's Soccer player (complete with V-neck collar and raised Imaginext "i" logo on the back). The cargo shorts-ed legs are nice and the parted-hair on the head feels fresh in the collection, and I dig the "hand painted" "i" logo on his chest. The real reason you're getting this, though, is the hot dog costume for him to wear. It's big, then and hollow - it sits high on him and the cut-out for the face it conspicuously large. It is fun, though, that they painted a strip of mustard down the front of the wiener. As far as goofy food-costumes go this pulls it off and is properly novel, but it's not up to Imaginext's usual standards, I have to say. 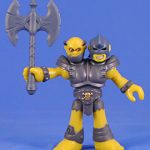 Whoa - cool! This is a surprisingly rad figure and a great use of minimal paint - and shows of the power of using armor to warrant that limited paint. What you see is what you get and I think he/they look pretty cool. The sort of snot-green is a great choice for the skin color and it's paired very successfully with the dark silver. The belt has a pretty Trapjaw vibe to it and the two heads of course suggest Two-Bad, so one can't help but take yet another moment to bemoan the insanity that there is no full and proper Masters of the Universe line within the Imaginext brand! Sadly, the two heads and UN-articulated, so you can't do anything with them but at least they look neat. I dig the side-eye Righty is throwing and the helmet on Lefty feels like it might be an homage to the Mythic Legions Orcs (or maybe just Lord of the Rings), which is sort of meta given the Four Horsemen's relationship with Mattel. 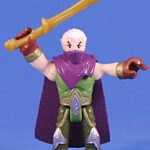 This is another fun looking guy! His sword clearly homage's Lord of the Rings by arguably straight-up being Elrond's sword, Hadhafang. The body if really nicely sculpted, with lots of details and a nice range of color and accents. The head is nice, I like the arched eyebrows, but I'm not sure I'm digging on the white hair. The big shock of the figure, though, is that the purple scarf and cape aren't removable! The plastic bit over his mouth and shoulders are the shape piece as is his unarticulated head, and it's glued on to his torso implicitly to keep his cloth cape in place. BUMMER! I was really looking forward to the wrap/cape and its potential use on other figures. And all for a cloth cape? Why? Maybe if he had a horse to ride, or something, but even then the cape could be contoured for that. It's just a super bizarre choice to me. On one hand there is added novelty of a cloth cape, but on the other hand that's cost us a second accessory AND head articulation. Oh well, at least the figure does look cool. 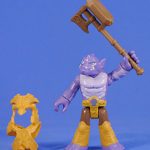 This guy is super cool! He's a nice, bulky, dragon-y sculpt with a cool metal eye patch and, amazingly, he still has neck articulation! That's a real rarity among these sorts of figures with big heads. The colors here are super neat too, with his skin being two tones of light purple and his armor being a sort of dull gold with brown pants. He gets a genuinely awesome battle axe/hammer that I'm sort of in love with! He also has a removable bit of armor that's a combined headdress and chest harness. The harness is open in the back so the whole thing fits on by wrapping the soft plastic X over his chest - and it fits and holds pretty well. I noticed that his belt is similar to the Jousting Dragon Knight I have previously bought as a Whiplash MotU homage, so I did a little research and it turns out this dude is a straight repaint of the Red Dragon Knight from that same series which came with the "Castle Serpent Vehicle!" I'm dumbfounded by how different this guy looks and feels with just basic color changes! And while I'm a little bummed there's nothing sculpturally unique about him I did kind of want that red version so I'm happy to essentially get it but for considerably less money (and space) than having to buy the big vehicle! 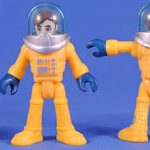 Well this is just amazing! After nine series of homages and allusions, Imaginext has finally taken off the gloves and straight-up remade one of their classic toys from the '80s. This guy is 100% one of the Spacemen from the old Adventure People toyline - the sculpt and helmet are dead-on! And as if there was any doubt - the colors and alien accessory come straight from the "Alpha Star Astronaut" figure! That's just kind of insane and awesome!!! It's not an exact match as the Alpha Star Astronaut used a bulkier helmet while the other figures, in black or white spacesuits, had this much cooler bubble helmet. I was particularly excited for the helmet because I love these sorts of retro things, so I made sure to get two - but I was thoroughly bummed out to discover that the helmet is permanently attached to the figure... WTF, Mattel!? It also has a conspicuous seem running across it side-to-side, because apparently they'd lost the technology used since the '80s to manufacture one without it. So basically you just gotta hope your guy is looking forward because you'll never get in there to move his head. I was all primed to LOVE this figure, but the helmet being non-removable pretty much spoiled him for me. His little alien pet is fairly neat though and perfectly replicates the classic toy. It's hollow and unarticulated, but that's to be expected. This is a really fun homage and a really exciting development for the future of Imaginext.