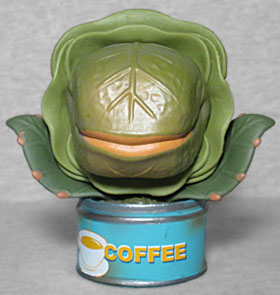 The POP! Movies Audrey II that yo reviewed today is not the only Little Shop of Horrors figure Funko is offering - it's a whole little line! There's Seymour and Audrey (I), of course, but also Orin Scrivello, DDS, and Baby Audrey II.

This plant is closer to life-size than the other one - the coffee can it's squatting in is vastly undersized (and also given a generic "COFFEE" logo, rather than bothering to license official Maxwell House art), but the plant itself is just a little smaller than the real prop. 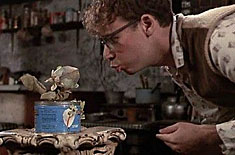 Audrey II's youngest form was designed to be cute and appealing, something Seymour would want to take home and take care of. It's young and helpless, so it needs protection until it gets stronger. Lyle Conway chose to make it look somewhat like a rosebud, but also used (Audrey I actress) Ellen Greene's lips as a model for the plant's mouth. The biggest trick, though, are the rounded petals right behind the head: they're designed to look like a baby bonnet! 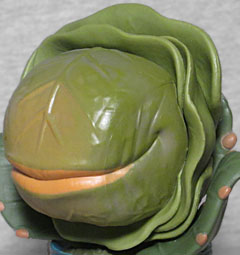 Baby Audrey II couldn't talk yet, so its mouth is still closed - it is, however, sculpted with a sneaky smile, something that didn't come about until the end of the movie, when no coffee can was anywhere to be found. Consider this an amalgam design, capturing the feel of Baby Audrey II more than the reality.

Despite being shown on the back of the boxes and having its own official number in the POP! Movies line (#653), Baby Audrey II is apparently a Target exclusive - at least, according to the sticker on the front of the box and the fact that no one else is selling it.

The big Audrey II is the more iconic figure, but Baby Audrey has a kind of sweet charm as well.

Here, as a bonus, is the original 1960 film in its entirety; Corman didn't think the movie would be a success, so he didn't copyright it, and thus it's been in the public domain since its debut. Since we personally own the movie, we can choose to show it to you:

This entry was posted in addendums, Funko, Target, videos and tagged Pop!. Bookmark the permalink.