Bonded to a Spirit of Vengeance, the Ghost Rider 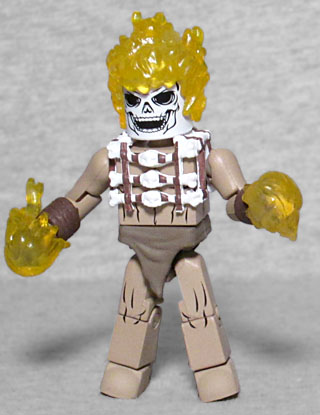 sits astride a giant wooly [sic] mammoth, who later falls victim to the Fallen.

Two things: one, it's spelt "woolly" mammoth, with two L's. No, I don't know why. And two, how dare this set not include an in-scale woolly mammoth for the Minimate to ride! Ghost Rider has actually been given an origin, in this year's Avengers #7, but you don't need to know a bit of it to appreciate this figure. He's got olive-tan skin, the same loincloth we've seen a couple time in this series, and a new chest cap sculpted to create his bone armor vest. He gets trans yellow flame effects for his head and hands, but it really feels like the head was intended to be done in the same translucent plastic and just have the face tampographed on - there's something about the design that makes the solid white look odd.

The Fallen is one of a race of Celestials, highly powerful 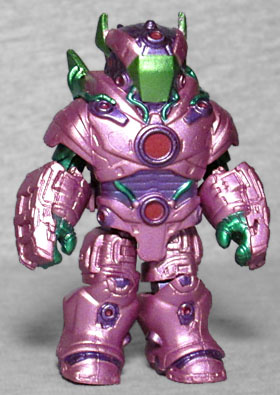 beings who pass judgement on all planetary bodies and the creatures who live on them.

Hey, that's neat! No one's made a toy of a Celestial before. Well, there was one in HeroClix, but that's a gamepiece, not an action figure. "The Fallen" is Zgreb the Aspirant, a Celestial who was infected and driven mad by a species of insect-like beings called the Horde. This may be the smallest-scale Minimate ever released - the average Celestial stands, like, Burj Khalifa height. In Minimate scale, that would be (math math math) about the height of a six-story building. So yeah, this is very small. Maybe pretend the Fallen is still very far away? Very very far. The armor on the arms and legs is the Hulkbuster molds, but the combo chest/head cap is a new piece with no foreseeable re-use potential. There's great, Kirby-ish detailing in the sculpt, and the colors are metallic purple and green. There's a body under the armor, but no detailing worth taking it off to see.

Considering that Walgreens' exclusive Minimates have thus far been limited to the cartoons and films, this comic-based series definitely feels like something that was planned for Toys Я Us and rescued from the implosion. Then again, the assortment number on the back of the card is "WALGREENS1000000BC," so that seems pretty clear. (On the other hand, how long would it take to print a different name on the planned packaging?) Wherever it was originally intended to be sold, it's at Walgreens now, and you get the entire team and their adversary in these four two-packs.