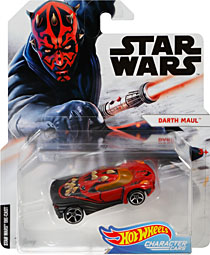 Okay, back to Star Wars.

With roof-mounted vortex generators resembling horns and a dark cloak flowing from the rocker panels, this sinister supercar roars through the streets with the ominous presence of Darth Maul.

This relentless Sith warrior's frightening face can be seen in the vehicle's hood and headlights, but watch out for the double-bladed Lightsaber across its taillights - only motorists attuned to the Force can steer past this double threat!

Well geeze, if they're just going to explain all that right on the back of the card,

what do you even need us for? I guess my job here is done! The Darth Maul Character Car was originally released in 2014, according to our research, but the version I got at Ollie's Bargain Outlet is the 2015 release, with a white card instead of blue. Doesn't much matter to me, because once the bubble's ripped off the card, the toy's the same. 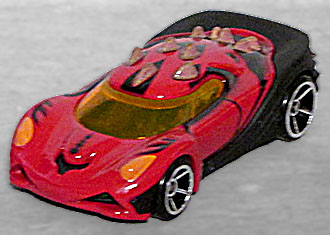 This is very recognizably Darth Maul: the red and black colorscheme, the bone horns, the lightsaber tailgate (just as the card promised), etc. The black lines around the doors and on the hood mimic the shape of his tattoos, and the headlights are orangey yellow to match his eyes. Plus, the style of car - sleek and sporty - really suits Maul's famous fighting style. Clearly some creativity and love went into creating this spooky ride.

Though it would have been neat if it had some sort of play feature where it split in half, to re-create his original end.