The second series of Transformers BotBots drops three new factions into the world, but it doesn't disregard the old ones. For instance, although we've moved over to a new wing of the mall, there's still an office supply store on the ground level, and that's still home to the Backpack Bunch. 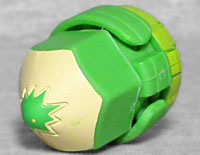 Series 2 may introduce another 60 BotBots, but that doesn't mean 60 new molds. In fact, more than half of them - 34, to be precise - are existing sculpts from Series 1. That's bad news for me, but good news for Hasbro's budget. And really good news for people who love fat pencils, because Series 1's Point Dexter has become Series 2's Scribby.

Her conversion remains the same, naturally: open the arms, pull down the feet, and unfold a panel to reveal the face.

Scribby loves to scribble, doodle, and draw! She's covered in 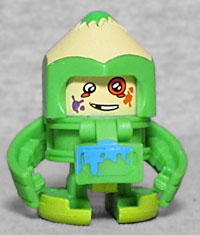 paint splatter because she gets too excited about her next art project to clean up after the last one. Her favorite things are drawing, daydreaming about drawing, and rainbows.

You've got to give BotBots some praise for having the best gender parity of any Transformers property ever - Scribby is just one of 40 female characters available as of Series 2, a number Transformers as a whole took decades to reach, while BotBots has managed to do it since last Christmas. She's painted with colorful splotches all over her face and chest, and her happy little grin reveals a missing tooth. 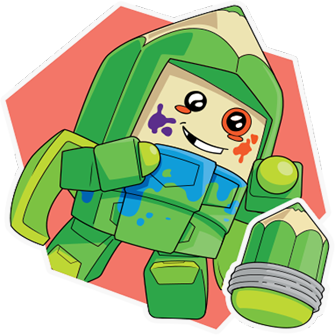