One of the new tribes introduced in BotBots Series 4 is the Winner's Circle, a group of golden trophy-bots who will judge the other team's efforts to cause mischief in the "Goldrush Games." They pretty much take the place of the previous series' Lost Bots, hiding out in the blind-packed portions of the packages. 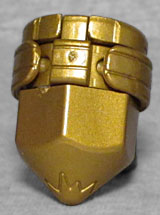 Additionally, they're all repaints, rather than anything new. Well, mostly; Liquid Gold the blender won't be showing up in normal colors until Series 5. So here we have the existing Point Dexter/Scribby mold, painted entirely in a slightly metallic gold paint. What use would a golden pencil be? You could neither write nor erase with it. Though there's probably something fun to be said about this fulfilling the alchemist's dream: since the tip isn't black, that means someone has finally turned (pencil) lead into gold.

The BotBots tribes are competing in the Goldrush Games 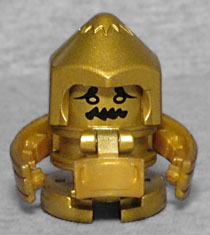 to see which tribes are the most mischievous! Winning tribes are awarded shiny gold trophy bots from the Winner's Circle tribe! This trophy bot is awarded for the most scientific execution of technically advanced mischief and won't stop until she finds the perfect tribe! Who will grab the gold?

We're just guessing, but... the Science Alliance? This may be a reused mold, but that means it'll be a pretty good robot. The pencillacious origins are readily apparent, but the curved arms are cute, and the feet actually look like something capable of supporting her. The face looks surprisingly distressed. What's got you so worried, Dexy? 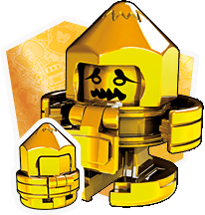 Gold Dexter is only available in one of the "Claw Machine Surprise Unboxing" sets - the one with Skitter Chatter and The Cobbler in the clear capsules. She's in a teal one.