We have no trouble believing that a cloud of Energon would drift onto a mall and bring all the merchandise to life - no, the real suspension of disbelief for Transformers BotBots is that any mall today would have a three-story tall arcade. The Arcade Renegades are all up and down the floors, but The Fizz is bouncing around on Level 3. 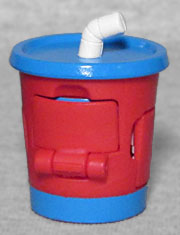 Reusing Twerple Burple's mold from Series 1, The Fizz is a standard drink cup. Judging by the relative size of the straw and the lid, not even a substantially large cup, either - if this was supposed to be a "Big Gulp"-style container, the straw would look a lot smaller, so we're thinking maybe 12 ounces at most? The size of a McDonald's kid-size drink? Definitely not as big as the height:width ratio might lead you to believe. This cup is red with a blue stripe and a blue lid, and the straw poking out the top is white.

The Fizz is the definition of cool. He walks around the arcade 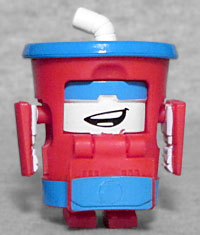 with his slicked back bendy straw and hip shades and just fizzes with awesomeness. Word is The Fizz is so cool that he can just kick an arcade game and get the high score.

"The Fizz" makes a lot more sense as a name once you read the bio and realize his personality is a takeoff of The Fonz, right down to Fonzie's ability to smack a jukebox and get it to play. The robot body is still very chonky, with feet that stick out from the body almost not at all, and the arms seem to stick out of his ears. His "hip shades" look less like sunglasses than Twerple's did, and his mouth is open in a different manner. It's surprising that they bothered to paint the insides of the arms a different color, so we could see them. 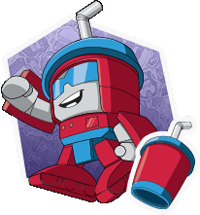 The art of The Fizz suggests a slightly different robot mode, one where perhaps the lower edge of the cup split in half and rotated down to become feet? Or maybe that's just the way he was drawn, because being true to the toy wouldn't have been very cool.