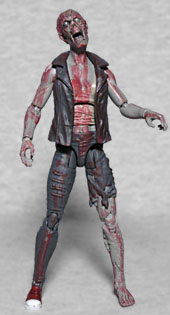 There's no plot in Chapter 6 of the Zombie Lab story, just world-building exposition. So that means we have no info about this particular zombie other than what we can glean from her appearance - what the story tells us is "hoardes of zombies have swarmed the humans' presumably safe location," which is what happens in every zombie fiction ever, yeah? A zombie story in which the threat never reaches the protagonists isn't much of a thing, is it?

This zomb is an interesting mix of existing pieces. She has one sneaker, a pair of tight jeans with the left leg ripped away (sort of making her the counterpart to the chop-topped zombie from Wave 5), and a tank top worn under a vest. The "vest" is the same piece Ashley (and others) wore, just with bare human arms instead of sleeves.

The head is the same one Specimen 459 used, which is a weird choice. Maybe the idea is that this particular corpse has been shambling around for the full three years of the outbreak, and so is showing its age? At least this one gets paint on the eyes, which is more than we could say for all the early ones, including 459 himself. Still, it feels like the Specimen 425 head would have made more sense. 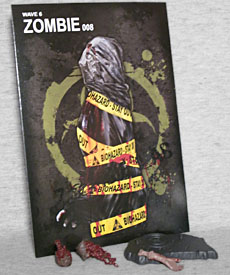 The zombie's skin is painted grey rather than brown, which, if we're following the logic of WWE Zombies, means she's not white. It also means the entrails and spine pieces all the xombies have come with don't work for her, because they're still painted in the usual brown shade. Bit of a waste then, innit? That's probably because the factory just had a big bin of those pieces they pulled samples out from for each package, but there really should have been different ones to better match the toy they came with. There's also the severed human arm, the display base, and the art card that weirdly shows not this zombie, but one wrapped in a shroud and bound in yellow hazmat tape. Uh, okay.