As mentioned in today's new review, Sam Raimi was planning to use Mysterio in his unproduced Spider-Man 4. In fact, the idea made it so far as the storyboard stage: 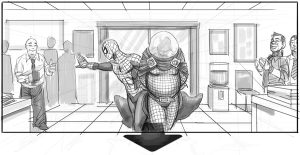 According to artist Jeffrey Henderson, the film would have opened with a montage of Spidey dealing with random villains who would never be able to support a movie on their own: Shocker, Prowler, Rhino, and yes, even Mysterio: 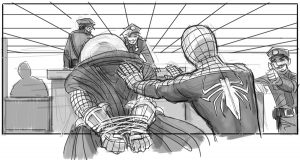 Now, that sounds like a cool thing all on its own. But as the storyboards reveal, Mysterio would have been played by none other than Bruce Campbell, which raises the question: were all his appearances in the first three movies Quentin Beck just trying to hold down day jobs?

Well, there's nothing to say they weren't, so we're going to assume "yes."

Now, in the wake of Far From Home's release, Campbell gave an interview which supposedly "debunked" this rumor, saying Raimi had never gotten in touch with him about the role. Well, that doesn't really disprove anything: all it says is that Sam Raimi had a reasonable expectation that his old friend would be available and willing to appear in the new movie, just as he had been for the first three.

This entry was posted in addendums and tagged Spider-Man. Bookmark the permalink.