Despite losing his symbiote, Carnage regains 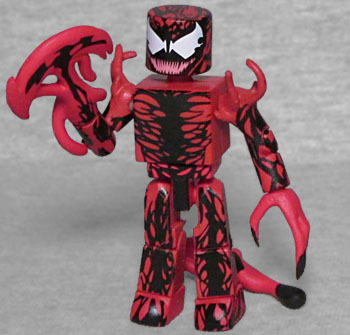 his powers and escapes prison, leading to a murderous spree through New York City.

Marvel Minimates Series 76 is based on the 1993 Spider-Man crossover "Maximum Carnage," so of course Cletus Kasady is included! This uses the tendril and axe hands from the 2014 Luke's Toy Store-exclusive box set Carnage, plus the upper arms with the symbiote strips curling up off them, but he uses Lady Deathstrike's long hands. The body is tampoed with all the thick black lines you'd expect, but they disappear entirely when we get to the hands - the only paint there is black fingernails? It's weird. Eh, the weapon hands look better anyway. Well, the axe, at least.

Temporarily merged with the Hobgoblin 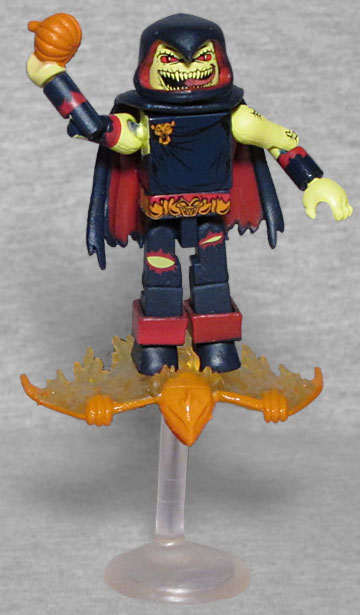 during the Inferno, this demon targets all "sinners," leading him to join Carnage's twisted family.

Hasbro's got a (new) Demogoblin figure coming out in the near future, but here's the Minimate one right now! The hood and cape are ragged, and he has little clawed hands we've been seeing for years. His pale yellow skin contrasts against the dark blue and red of his costume. He's got the full demon face, with the lumpy eyebrows and the long fangs, but the style means his gross tongue has to only be painted on, not 3D.

However, the part of the budget that may have gone to finding a way to create his tongue was used for something better: rather than a normal Goblin Glider, Demmy rides a giant bat made out of hellfire; so this is an all-new piece, molded from translucent orange and given solid paint apps along the leading edge. It has a great flamey sculpt, but the footpeg that's meant to hold him on is too small for the holes in the feet, so the figure is constantly pitching off his ride (and no, we're not talking about the pumpkin bomb hand).

Series 76 is one of the ones that has a Build-A-Figure, so the set includes some pieces for that. The figure is Shriek, and the pieces are her arms.