Via the Darkforce dimension, Tyrone 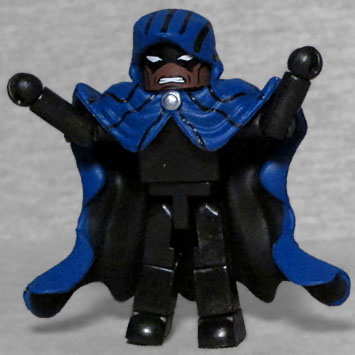 Johnson can teleport great distances, and draw people into his cloak to experience their greatest fears.

Kudos to Marvel Minimates Series 76 for not simply reusing the 2009 figure's cape - it's such a distinctive piece, they would have been entirely justified in doing so, but this one, 10 years and 53 series later, is bigger and more dynamic, flaring out behind his body like he just teleported in. The body is pure black, and there's a similar shadow painted on his forehead. His blue cloak and hood have black stripes, but one of the apps on my figure accidentally got skipped. That'll be easy to fix.

Tandy Bowen is able to create and throw blades of light, 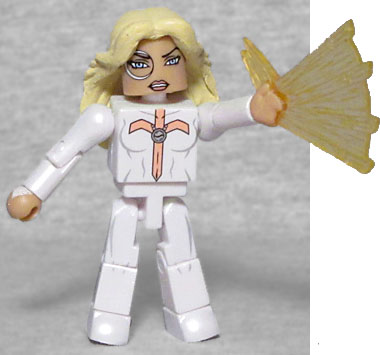 which weaken whomever they hit, and can also purify people of their addictions.

When we reviewed the previous Dagger Minimate, we said a modern version would have more detailing, and we were right: the silver paint of her anatomy shows ribs, muscles, clavicles, etc. that she didn't have before. She also gets a yellow version of Longshot's knife-throwing hand, something else we asked for in that old review. Her hair is a lighter yellow, and the suit is a pearly white, rather than just being flat. These are both good updates of characters who probably were fine the way they were, but Dagger is the better one.

Series 76 is one of the ones that has a Build-A-Figure, so the set includes some pieces for that. The figure is Shriek, and the pieces are her legs.