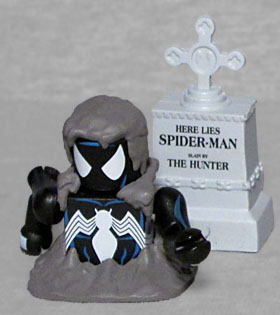 While Spider-Man has many super-powered enemies, one of his oldest and greatest is the powerless, but cunning, Kraven the Hunter.

This is kind of awesome. While you do get a full Minimate when you buy this set, we've had plenty of black-suited Spideys before. This one, paired with Kraven, is meant to represent the iconic cover of Web of Spider-Man #32, with him rising from his own grave. To that end, the set includes a mound of dirt that fits in his head, a "Here Lies Spider-Man, Slain by the Hunter" tombstone, and then, at last, more dirt: this time a base the torso can plug into after you take off his legs. Who knew a desecrated grave could be such a fun design! 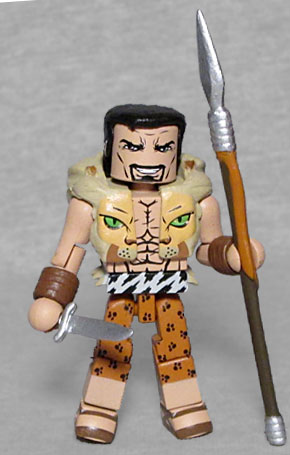 Sergei Kravinoff has hunted everything that walks, flies or swims on the Earth, but the greatest hunt of all is his quest to capture Spider-Man.

It's been a solid decade since we got our last Kraven, so this one shows a lot of improvement. The belt is a new piece, with actual "teeth" sticking off the sides rather than just being painted on, and the lion-head vest is a fully sculpted mold, rather than trying to force it all onto a powerhouse chest cap. The paint tampo in the face is finer and more delicate than before, though they have given him a goatee instead of a separate mustache and beard. He has leopard-print capri pants, like he's going out for drinks with the girls, and is armed with a spear and a gigantic knife, also like he's going out for drinks with the girls.

Series 77 is one of the ones that has a Build-A-Figure, so the set includes some pieces for that. The figure is the Spider-Slayer, and the piece is its head/helmet.