I was slightly too old to really be into Power Rangers when it debuted - it's hard to care about teenagers with attitude when you already are one - but the show pervaded pop culture so thoroughly that I do admit having a little soft spot for the designs. And since this is Leap Year, February has five Saturdays, meaning Old Toys Month is finally getting some MMPR action!

The Tyrannosaurus Zord, fiercest of all the Dinozords, is piloted 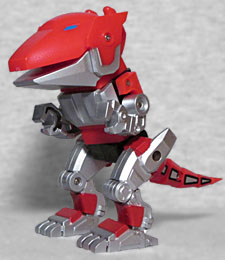 by the Red Ranger and outfitted with powerful jaws and a tail that could take down evil monsters. Sometimes acting alone in combat, the T-Rex Zord had the ability to create seismic blasts with a mighty roar.

Did the Red Dinozord really fight by itself sometimes? I thought they just summoned all the Zords, which then immediately combined into the Megazord. Never understood the point. At least the Voltron Force would use their individual lions against monsters for a little while, but with the Power Rangers, it always seemed to be one-on-one karate fights against Putties, a five-on-one fight against the monster of the week, then "make my monster grow" and call in the robots to form up. I could easily be wrong, though.

This line is made by The Loyal Subjects, so the design 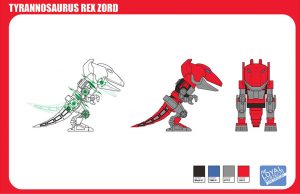 features a large head on a small, stylized body - and that applies to the Dinozords, not just the humans. The toy was designed by Frank Pepito, who did a decent job of fitting the T-Rex design to the Loyal Subjects style... except that the head is too smooth, making it look more like a salamander than a tyrannosaurus. It could also use more tummy. We get articulation at the knees, hips, tail, waist, shoulders, neck, and jaw, which is more than you'd expect.

The Zord comes with a card featuring the bio we quoted above and a checklist of figures on the back, plus a totally unexpected surprise: a tiny Red Ranger figure! It stands only about an inch tall, and its only articulation is a single hinge through the hips, but it's painted pretty well for its size and, oh yeah, the helmet is removable! You can take it off to see a wee little likeness of Jason. That's pretty fricking awesome!