The Triceratops Zord, piloted by the Blue Ranger, is outfitted with a laser-shooting twin-cannon on its tail to subdue foes in battle. 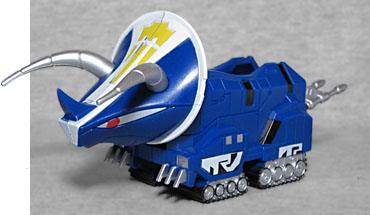 When not in use, the Triceratops Zord remained in the desert until being called by the Blue Ranger when things got hairy.

Putting lasers on a triceratops' tail seems like just about the least effective use of space imaginable. They've already got horns pointing forward off their face, why would you not just turn each of those into a gun barrel? As it is, the Zord now has to raise its tail up high enough to clear the giant neck frill, which seems like a waste of time and energy. 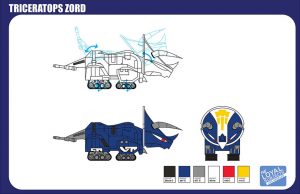 This line is made by The Loyal Subjects, so the design features a slightly larger head than usual. It's kind of their thing. The toy was designed by Frank Pepito, who did a decent job with it. The back of the frill should be hollow, not flat, but the rest is fine. You have to put the horns in after you open the figure, but the pegs are shaped so you know which one goes on which side. The head and tail are both hinged, and there are rolling wheels under the tank treads.

of figures on the back, plus a totally unexpected surprise: a tiny Blue Ranger figure! It stands only about an inch tall, and its only articulation is a single hinge through the hips, but it's painted pretty well for its size and like the others, the helmet is removable! These are technically based on the movie, not the show, but Billy was the Blue Ranger in both (at least until David Yost left the show because the staff kept bullying him for being gay - the 90s sucked), so we're confident in saying that's who this is. Shame they didn't sculpt his glasses, though.