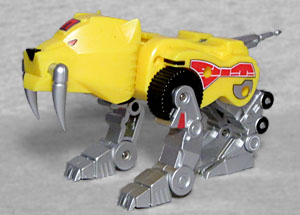 The Power Rangers Action Vinyls were sold in 16-box cases, and of course the figures were all available in different ratios - 2:16 for the T-Rex, Sabertooth Tiger, and Mastodon Zords, 1:24 for the Triceratops, and 1:48 for the Pterodactyl (plus 2:16 for all the main Rangers, because The Loyal Subjects still doesn't know how to do math; if there are five Rangers and three Zords that are all "2:16," that's the entire case with literally no room for the rarer figures). It was still pretty easy to find the Zords, because you could hear their parts rattling around more than the humans' when you shook the box.

The toy was designed by Frank Pepito, who did 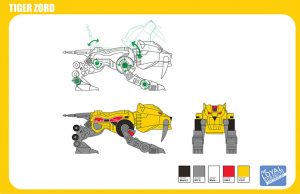 a nice job super-deforming it. The head is quite large, while the back end is distinctly smaller. The head, tail, legs and feet are articulated. Unlike the Mastodon's wobble legs, these joints are super tight. There are a number of surprisingly sharp parts here: not just the fangs and claws, but the end of the tail and even the tips of the ears, so watch your fingers. It may seem weird that the Sabertooth Tiger Zord has tires on its legs, but those were used in the combined "Battle Tank" mode.

Like the other Zords, this one comes with a few extras in the box: a checklist card featuring the bio quoted above, and a 1" tall Power Ranger pilot. Its only articulation is a single hinge through the hips, but it does at least get a removable helmet. Technically

these figures are supposed to be based on Power Rangers: The Movie, so the face we see beneath the helmet is most certainly not Trini - like, one white boy looks pretty much the same as the next, so you may have not realized who the Red Ranger was meant to be, but it's easy to tell that the Black Ranger isn't black or that the Yellow Ranger is. Hi, Aisha. This little figure gets a feminine body, which is more than could ever be said of the Yellow Ranger on the TV show - since the Japanese Zyranger equivalent was a boy, all the reused footage showed the same. As kids, we never noticed. Of course, I never noticed that all the Rangers' helmets were unique either, with elements of their totem animal worked into the design, so maybe I was just dumb.

It's understandable that the Loyal Subjects' Zords don't combine into the Megazord, but why didn't they offer a solo Megazord as a standalone figure? Even if it had to be done in two pieces like Attack on Titan's Titans, wouldn't having a big, poseable robot have been fun? It certainly would have been a better use of resources than the black or clear variants they released.