Wing 3 of the Transformers BotBots mall is home to a simply gigantic play space stretching from the ground floor to the roof, because they had a lot of Arcade Renegades to introduce. That means there's plenty of room for prizes and games, with Driver Ted being found down on the lowest level. 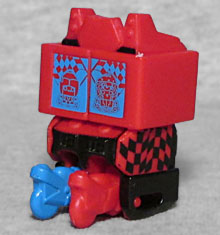 Arcades are a quaint old-fashioned thing these days, but this is not just a standalone machine - it's a fancier ride-on version, some sort of competitive motorcycle racing game. There's the big cabinet with the huge screen, of course, but then two small plastic motorcycles stick out the front - one blue and one red. The cabinet has a red and black checkerboard pattern near the middle, and is completely red on top. The blue screen shows red outlines of two BotBots in front of racing flags: Point Dexter and The Plop Father.

BotBots are not complex to convert, so all you need do here is fold the bikes down and slide them back, open the screen to reveal the face, and swing the arms down from the sides.

Pump the brakes there, wise guy. Driver Ted is all about 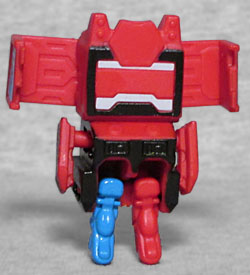 the rules of the road, instructing other bots to obey the speed limit and keep their eyes on the road. Hopefully all the other bots are taking notes, because there will be a test.

That's pretty funny: you'd expect the racing game guy to be all "zip zip zip, need for speed" or whatever, but the creators here went the opposite direction. The fact that the dual-colored bikes form the legs make Driver Ted look like he's wearing weird boots. The face is nothing but a horizontal red visor on a white background - at first glance, I thought the white was teeth, and he was just screaming at the top of his lungs, which is infinitely funnier. It can be hard to find a proper balance point, since those big flaps hang off the back of his head, but he's still fun to play with. 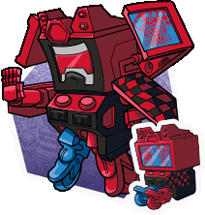 Driver Ted is only available in the Arcade Renegades 16-pack - as one of the new molds, he's visible up in the top section, rather than being blind-packed.