This is the latest in a series (of indefinite length and regularity) of blog posts memorializing cancelled toys. Our figure today is Mattel's Hawkgirl.

DC, as always, has several different Hawkgirls, but this one is Kendra Saunders, as seen in the "DC Rebirth" stories. 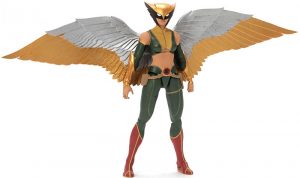 Once again an incarnation of every Hawkgirl who came before her, Kendra would have been wearing her current costume, and have metal (rather than feather) wings, which could have swiveled up so they didn't look as awkward. The figure was never officially cancelled, but with Mattel losing the DC license as of this year, she's never going to be released.