Strong Guy joined X-Factor for the simplest of reasons - 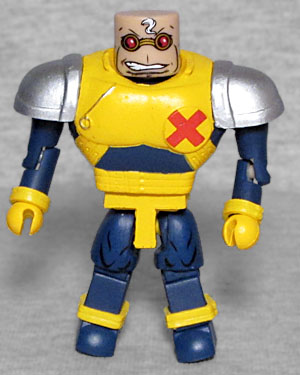 the regular paycheck! Caring little about the problems between man and mutantkind, he lives instead for the finer things in life - wine, women, and song! And he's not above using his tremendous mutant strength to put those who would criticize his lifestyle in their place!

Originally introduced as a bodyguard for mutant rockstar Lila Cheney, Guido wore specially tailored tuxedos until joining X-Factor and getting his first costume (and his supranym). It's basically the team uniform, a blue and yellow suit with various straps around the wrists and ankles, an ornate, layered belt, and a vest/jacket thing with a zip-up panel and a red X logo on the chest. He's also got big silver shoulderpads, and wears a pair of red goggles over his eyes. His head is bald, save for a single lock of hair (painted) right on the forehead.

Strong Guy's bulk, as a Minimate, comes from his new purpose-made chest cap.

This isn't some smooth Hulk chest that everybody will be using from here until the end of days, this is something that can be for Guido and no one else. The only thing on it that's just paint is the X! The chest cap has its own pegs for the arms to plug onto, making him extra wide. But no add-ons to increase the size of the arms? Little noodly appendages. Also, yes, he was big, but he still had a neck! The chest cap almost eats it entirely.

Minimates all share the same basic body with different paint decos, and they all move at the same 14 points: neck, waist, shoulders, elbows, wrists, hips, knees and ankles. The modular construction is perfect for the BAF idea, and it really works for a character like Strong Guy, who'd never really make sense as a normal release by himself.

With four two-packs, however, Series 78 really does make us miss the days when Toys "Я" Us would get exclusive sets that complemented the mass releases: the '80s X-Factor is missing its Iceman, while the '90s version is short one Quicksilver. Yes, you can borrow them from other sets, but you just know TRU would have had them in a single box. Walgreens is good, but they're not as on the ball with these things.