The first series of DC Imaginext Blinds Bags was a big surprise but was, and has been, notoriously difficult to find, even after a re-release a year or two ago! So it was a great relief to find this second series of DC heroes and villains packaged up individually just like the awesome "generic" Imaginext series! 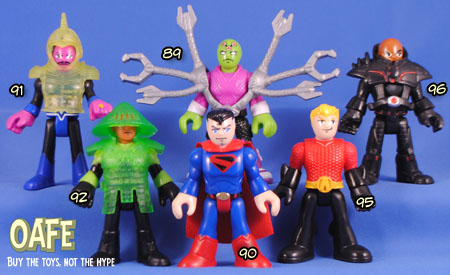 Ultimately, this series seemed to be massively over-ordered, perhaps to compensate for the difficulties/success of Series 1, but these figures can still be found with some ease nearly four years later. This languishing made subsequent series tougher to find, but I will say this is certainly one of the strongest lineups they've done in the blind-bag series for DC! We get a bunch of iconic characters and a perfect balance of heroes and villains - and they all pair up nicely! It's a great format and make for a very collectible series! There's a decent mix of colors, too, but they definitely have a touch too much black... especially as a group, this is a very dark palette.

The foil packaging follows the standard conceits of the format, but gives a surprisingly good look at all four figures on the front of the package. Red is used to background the series number on the front and fill in the product silhouettes on the back. As is the case for all these series, there a code number unique to each figured stamped on the upper left corner of the back of the package - making it very easy to find the one you want! 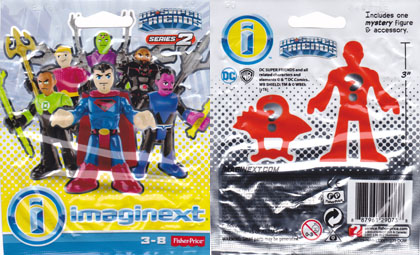 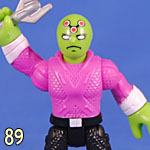 This is a fun little figure a good pseudo mashup of a classic costume with a modern aesthetic. He's just a straight repaint of the Lex Luthor figure with the "Super Friends" kind of design, but the bright colors really make him feel different while the sculptural detail make him more appropriately sci-fi-y than the classic outfit (not to mention the much needed inclusion of pants at long last). I really like the green skin, a very nice counterpoint to the bright pink shirt, and the three-dot brain-light graphic is nicely captured and printed on his forehead. His accessory is a weird sort-of Doc Ock contraption with six robotic tentacle-ish arms coming off of the shoulder pads of a chest harness. Very toyetic, and the middle arms have claws that can grab Imaginext figure arms. It's weird but fun, kind of like the character himself. 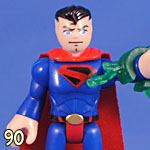 Boy do I love Kingdom Come Superman! It's kind of amazing that Imaginext went for this variation of the character (and in just the second series too) given the source material, but I'm quite happy to get him! This figure repaints the New 52 Superman pretty effectively. Using richer blues and reds, along with a more classic belt deco and, of course, the iconic Kingdom Come S-shield on the figure really pops - especially with his accessory! It's the familiar chained shackles piece but now cast in a rubbery translucent dark green. Obviously, this is meant to be kryptonite which, on a conceptual level, makes this one of the grimmest releases in the whole line! Still though, it looks very cool and color balances with the red and blue of the costume exceptionally well! Aside from the S-shield, the most iconic bit of KC Supes is his grayed temples, and this figures nails that perfectly, too. I mean, I think I'll go so far as to say this figure feels more accurate to the book than the recent Multiverse figure for me! 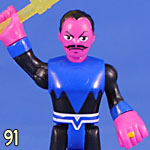 Sinestro is my boy! And while I'm infinitely more into the Sinestro Corps version and costume, that figure was IMPOSSIBLE to find, so I'll happily buy this classic version instead. He is a straight repaint of that that Sinestro Corps figure, which means he has a raised circle on his chest for no clear reason. However, the bright blue on the costume and bright pink of the skin help distract from that. The head is well executed and they did include his yellow power ring, too. He comes with some constructs in soft translucent yellow plastic. There's a reissued Knight helmet and armor (clearly from the "Battle Arena" series thanks to the big rectangle on the back meant to glue into some kind of action-pack) and a big Sci-Fi/Gladiator sword - which is, honestly, quite cool! I'd love to see that thing in more traditional colors, for sure. This Sinestro is a surprisingly good rendition of his classic outfit - I just wish they'd make his much cooler Corps version more readily available! 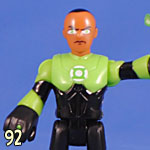 John Stewart here is a pretty nice figure and a decent repaint of some armor-y body. It's not quite accurate but it's a good mashup of costume and available tooling. Weirdly, they used a pale green plastic which doesn't seem very right for John. There's also something a bit off about the head (a bit too "inverted pear"-shaped, I think) and the power ring is just a dot of paint on his hand rather than a raised part of the sculpt like on Sinestro. I kind of have to wonder how the figures would have looked if they'd swapped the bodies used for Sinestro and John, here. He also, bizarrely, comes with the armor and weapon from the Chinese Warrior in Blind Bag series 5... they do look kinda neat in translucent green, but make absolutely no sense for this character at all. Overall, this Green Lantern is fine, but he's definitely not as strong of a release as the previous three figures. 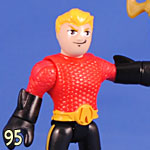 I do love me some Aquaman, but the whole idea of "Flashpoint" just seemed too goofy and cliché for me to bother with, let alone the fact that all the costumes were pretty boring - just more black and/or red to prove... "Evil"! Yawnsville, population: DC. This figure is a straight repaint of the New 52 Aquaman but in much richer colors, so while I don't like the outfit it does look better than that original figure. The shirt is a rich reddish orange, and the yellow on the belt and sides of the legs looks good. It's really a shame that DC just farted out black for the green parts of the costume - it would have been much more visually interesting if they darkened/color-shifted the green just like the did the orange. But... it is DC after all... 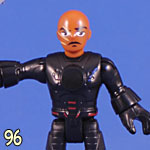 Black Manta also sports a repainted Lex Luthor body, this time with a more Power Suit sculpt to it. The torso does have a big, conspicuous circle on the chest, but the general Iron Man-ish techno design of the rest seems to fit this character well. Little bits of red paint help add a bit more variety to the armor, too. He comes with a repaint of "Super Friends" Lex's Power Armor, which is neat and works well enough... but where is the man's signature helmet!? Seriously, if ever a DC character was meant for Imaginext's removable helmet + armor gimmick it was Black Manta! But the only way to get his helmeted look was to buy a more expensive set that included his sub! I get that this series was all about the economy of re-use, but come on, Mattel! They gave him the Sea Creature's trident, which works surprisingly well for this figure (and arguably the Creature's breathing apparatus repainted would be a better Black Manta armor than Lex's). At least they didn't skimp out on his face deco, and gave him a stern expression and three scars over the right side. So... if we have to look at Manta without his helmet on, at least it's a bit more dynamic than the norm.

This entry was posted in codes, DC, Mattel, Rustin's Spoils of the Week and tagged Aquaman, Green Lantern, Imaginext, Superman. Bookmark the permalink.