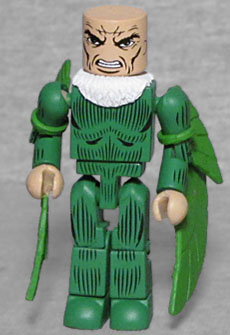 Adrian Toomes was an electronics engineer who developed a flying harness. Betrayed by his business partner and left with nothing, he turned to crime.

This is the first time Vulture has been available in a regular series: his first Minimate was in a box set, and there was also a "Marvel Zombies" version. This one uses the same extra pieces as those - the wings on the arms, the ruff on the neck - but still gets his own paint masks. The little "texture" lines on the body are shaped to suggest a body beneath them, and he's got an angry look on his face (though he doesn't look as old as the previous version). The set includes a hover stand for him. 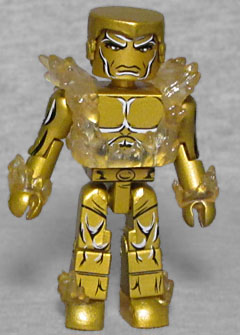 A lab assistant who helped develop the Spider-Slayers, Mark Raxton was covered in a liquid metallic alloy that gives off intense heat.

And here we see the benefits of appearing in a Marvel movie. Before Far From Home, the only Molten Man figure there had ever been was a ToyFare-exclusive repaint in 1997; but (tangentially) appear in one movie, and suddenly you get a Minimate! Ths one gets translucent yellow flame pieces on the feet, hands and chest, and a flattop that's similar to J. Jonah Jameson's, but smoother. You can swap his hands and feet for normal versions, so you can have him flamed off, and the details of his body are painted in both black and white, to make him look metallic.

Series 77 is one of the ones that has a Build-A-Figure, so the set includes some pieces for that. The figure is the Spider-Slayer, and the pieces are its legs. 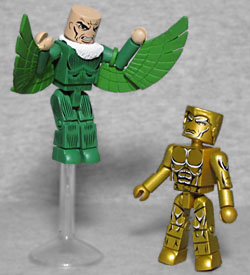