If there's one thing malls have in abundance, it's empty retail space. You know who just loves empty retail space? That's right: Spirit Halloween stores! But also gyms, which is why it's not unusual to find a vacant JC Penney turned into a Gold's Gym, or a destitute Office Max repurposed as a Crunch Fitness. Anyway the point is, it makes sense that the Cardio Clique would be in the BotBots mall. 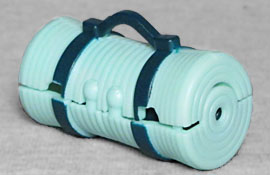 This BotBot is a yoga mat. You may not think that a flat piece of plastic or rubber would make for a very interesting Transformer, but this is a yoga mat that's been rolled up. Gives it a little more bulk. It's hard to think of what else this mold may be used for - if not for the straps keeping it rolled, you might think "a log"? Or a newspaper? But with the straps, this is just a rolled mat. At least it's kind of in scale with larger figures, so you can send Batman or Ant-Man to stretching class.

BotBots no longer come with instructions, which is bad in this case: you need to know where you're headed before you can get there. Raise the two ends and lower the two strips in the middle. Fold the weirdly angled legs down as one, move the arms out, slide the head up, and then tuck the strips from before up by the shoulders.

Life's too short. That's the philosophy of Nomaste. This yoga mat bot has flexible rules for her leisurely lifestyle and bends over backwards to stay relaxed and comfortable. Going to yoga class is a bit of a stretch though. 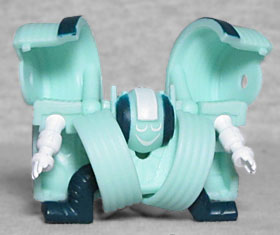 She'd rather nama-stay at home in her workout clothes and just hang out.

While Nomaste's robot mode looks interestingly odd, being distinct isn't the same as being good. The legs are molded in different poses, which may be an attempt to make her look like she's doing a yoga pose, but ends up meaning that the feet don't want to both be on the ground at the same time. Plus, with all the mass that ends up on the robot's back, she just can't stand up. We had to prop her up just to take this photo. They should have repositioned the carrying strap, so it would rest on the ground in this mode and give her more support. Alternately, you could choose to mis-transform her, and swing the strips around from the front to the back to do that same thing. 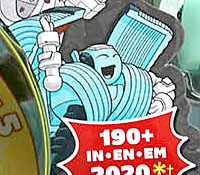 Nomaste is available in a Cardio Clique 5-pack and two Hibotchi Heats 8-packs. Which may be too plentiful, because this is one of the worst BotBots there is.