The Transformers BotBots line takes place entirely inside a mall. And if you remember malls, you may remember that they had little areas where most of the food was sold - they were called "food courts." And one of the staples of any food court worth its salt is a Chinese restaurant that's somehow less authentically "Chinese" than Taco Bell is Mexican. And it's always called something like "Kimchi Golden Panda Pancit" or something. Anyway, that's where the Hibotchi Heats live.

Sushi may seem like an odd thing to find in a mall, but these days 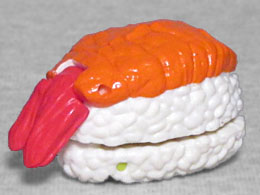 you can get it at the average grocery store, so a food court restaurant isn't that outlandish. This is technically nigiri: the "normal" sushi is maki, fish, vegetables and rice rolled up in a sheet of seaweed; nigiri is a thin slice of fish draped over a wad of rice, usually with a small dollop of wasabi in between. This is seemingly shrimp nigiri, judging by the distinctive tail hanging off the end. The meat and the rice are both sculpted excellently, making this a fine little replica piece of sushi.

BotBots have simple conversions. For Wasabi Breath, you fold down the legs, raise the tail, then open the body to fold the head out.

The mighty Wasabi Breath strives to protect all that bots hold sacred. She is a very wise dragon bot. She shares her wisdom with the other bots 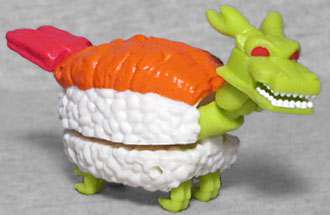 to teach them important lessons, but her advice can be a bit long-winded. When she gets on a roll, there's no stopping her.

That "on a roll" joke would work a lot better if she was a sushi roll, not nigiri. Still, having a piece of sushi that changes into a Japanese dragon is a brilliant move - the shrimp's texture suggests a scaly body, while the head (done in the light green associated with wasabi) has horns that resemble the plant's stems. After reviewing a few duds, it's nice to get back to a design that's really inventive and fun to play with. 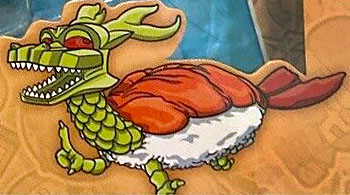 Wasabi Breath is available in a Party Favors 5-pack, or two of the Hibotchi Heats 8-packs.