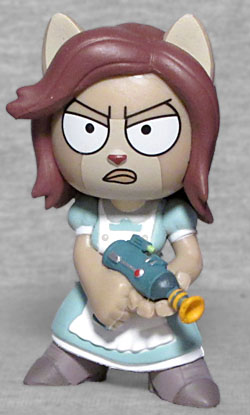 The Rick and Morty Season 2 finale, "The Wedding Squanchers," was not meant to be a cliffhanger - originally, it would have been a single two-parter to finish things off. When the writers couldn't get the story together in time, the episodes were pushed back, with "The Rickshank Redemption" now serving as the Season 3 premiere. Unfortunately, that left a hole in Season 2, so Dan Harmon wrote "Look Who's Purging Now" in less than a day.

In need of windshield washer fluid, Rick sets down on a world that seems to have only reached a level of rural agrarian development - Space Amish, basically. When Morty saw a cute girl in danger, he convinced Rick to save her... only for her to steal Rick's gun and shoot him in the liver. 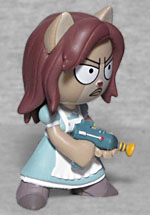 Arthricia comes from a race of cat people, so her skin (fur?) is a desaturated tan with a lighter color on her muzzle. Pointed ears poke up through her brown hair, and while the angry, determined look on her face is simply painted on, her nose is sculpted. Her plain blue dress and white apron makes her look like a diner waitress. She's holding the gun low and has a wide-legged stance, making it clear she's an active figure, not passive.

Part of Rick and Morty Mystery Minis Series 1, Arthricia is available in a 1:12 ratio - there's one of her in every case.