There was a time, once, when Marvel was trying to dial back on the whole "Marvel Zombies" thing. They'd gone hard on it, 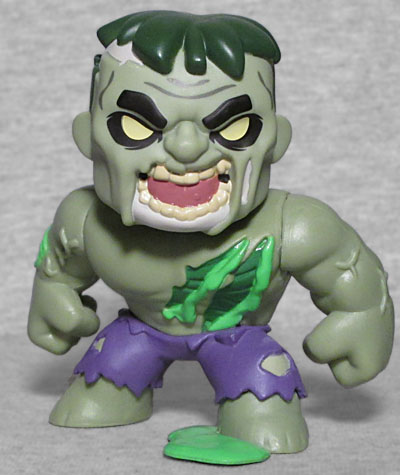 and could see the signs that it was getting played out. So there were no more comics, no more merch, no more zombies. And even when they did come back in a greatly reduced capacity, the stipulation for licensors was "villains only, no heroes." That's clearly been lifted now, because not only is there a new comic series (Marvel Zombies: Resurrection), there's a whole bunch of zombified Marvel figures from Funko, including an entire series of Marvel Zombies Mystery Minis.

There are eight normal figures (Deadpool, Wolverine, Hulk, Phoenix, Gambit, Venom, Black Panther, Magneto), a couple exclusives (She-Hulk at GameStop, Daredevil at specialty stores), and several black-and-white or glow-in-the-dark exclusives. So far I've only seen these at Walmart, and went for one of the two heaviest boxes, meaning it would either be Venom or Hulk.

Hulk is standing in a very threatening pose: legs wide, fists clenched, leaning forward and yelling. There are veins sculpted straining above his muscles, 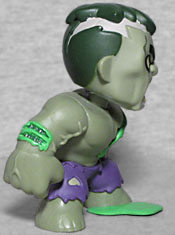 and he's got the usual torn purple pants. His left foot is in a puddle of green ooze, to help the figurine balance. That green stuff may be blood, because it's also seeping out of the big slashes on his right arm, chest, and back. And if you look in those, you can see his muscle fiber! His eyes are blank, with dark circles around them, and although the skin around his lips has been torn away, his mouth is still open in a bellow. A cut all the way around the side of his head reveals his skull.

Like we've said before, licensing restrictions mean all Funko's Marvel products have to be done as bobbleheads, not solid toys. That means 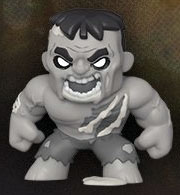 Hulk starts wiggling his head any time you move him, which isn't great, but at least you can pretend he's just extra angry? It'd still be better without that restriction.

Zombie Hulk is available in a 1:6 ratio, meaning there are two of him in every box. He's also one of the figures to get a b&w variant, done 1:72. Weird he'd be the rarest, since he's the only one of them who might conceivably be grey.