Imagine what it would be like to know no one would ever miss you when you were dead. 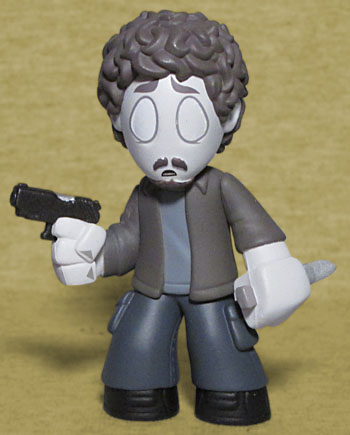 You may not remember Nicholas' name, but there's no forgetting his role in the series: he's the guy on the dumpster. He lived in Alexandria when Rick's group arrived, and worked as a supply runner - the folks who go out into the world to scavenge things for the rest. He didn't trust the newcomers, and so resented when Glenn began to show him up by being better at the job. He's the one who caused Noah's death while they were all trapped in the revolving door. But of course, his most infamous moment was when, stuck on top of a dumpster and surrounded by a herd of zombies, he shot himself in the head and managed to drag Glenn down into the swarm with his dying body. Dick.

Nicholas is part of the Walking Dead In Memorium series, which usually shows the characters right near the moment of their death. It would have been in extremely poor taste to release a toy holding a pistol to its own head, so he's just standing here looking scared. He's got his gun in his right hand and a knife in his left, but it's just a very straightforward, unremarkable pose. Turn his head to the side, bend the knees a little, bring the knife up a little more... match his pose from the top of the dumpster, Funko! His colors are muted, as is the style of the line, but his jewfro and dirtbag mustache make it clear who it's supposed to be.

Nicholas is available in a 1:24 ratio, swapping places with Denise in alternate cases.