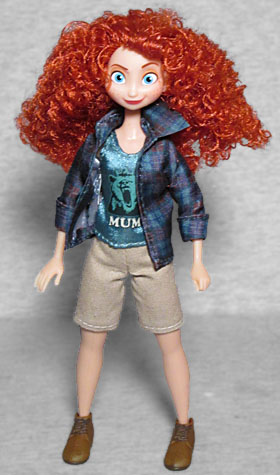 the writers had to make the concession that these weren't the "real" princesses, but rather merely actors portraying the princesses for the Oh My Disney website - in other words, the digital equivalent of costumed meet-and-greet cast members inside the Disney Parks.

Merida was the first Disney Princess not to have a love interest - possibly because she was also the first to not come from a Disney movie, but rather Pixar (where she was their first female protagonist). Her casual outfit is very similar to Anna's: a flannel over a T-shirt, and loose shorts. Sweatshorts, in her case, as opposed to Anna's jeans, speaking to how their personalities are similar, yet distinct. Her shirt has an image of a bear with the word "Mum" beneath it, but other potential designs included a stylized bow and arrow with a Celtic knot behind it, a bear boasting of their "bow hunting skills," or one that said "ginja" (pronounced with a soft G, it's a portmanteau of "ginger ninja"). The original design would have seen her barefoot, possibly meant to be a pun? Because her mother also spent so much time going around "bear foot"? 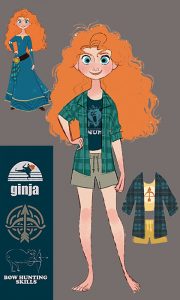 All the Comfy Princesses have the same joints: balljointed head, swivel/hinge shoulders and elbows, swivel/hinge hips, and knees that are ratchet joints inside a rubber sleeve, making the legs seamless. Rubber ankles mean they're very hard to stand, though. The hair is rooted, and shaped to match the style seen in the film. Naturally, hers is a giant, curly red bush; and unlike Tiana, Merida's hair is the right length.