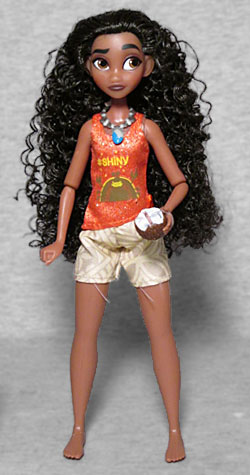 the studio's biggest monkeymaker in years), Anna and Elsa are not technically Disney Princesses - maybe that's why they were sold separately from this set? The official tally stands at 12, with Moana Moana being the latest one. Huh, that whole "treat mononymous characters like their property is their last name" thing doesn't work when their name is their property, does it? I guess she won't get to hang out with Sans Undertale, Marcy Peanuts, and Noodle Gorillaz just yet.

Moana was already pretty casual even before putting on comfy clothes, with her outfit basically being a skirt and a bandeau. You can tell she's used to warm weather, because her modified outfit is a pair of patterned shorts and a loose tanktop that's tied in a knot on her left. She's got no shoes, but is still wearing her grandmother's magical necklace. The pattern on her shirt is a big crab that says "#SHINY," as though anybody remembers any song from Moana other than "You're Welcome." They did at least consider a version with Maui, and another with the little coconut guys, but no, instead she's got crabs. 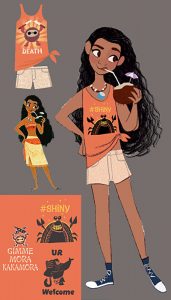 All the Comfy Princesses have the same joints: balljointed head, swivel/hinge shoulders and elbows, swivel/hinge hips, and knees that are ratchet joints inside a rubber sleeve, making the legs seamless. Rubber ankles mean they're very hard to stand, though. The hair is rooted, and shaped to match the style seen in the film. Moana's is just as curly as Tiana and Merida's. She also gets an accessory rubberbanded to her hand: half a coconut with a straw sticking out of it. You'll probably want to leave that rubberband on, because there's no way for her to hold it otherwise.