Robert Heinlein is a complicated author. Not the way he writes, particularly - the stories have clear-cut good guys and bad guys, and it's generally easy to tell right from wrong in the plots - but he himself. Most authors have a pretty clear-cut sense of morality that comes through in their work; you'd never see the notably jingosistic Tom Clancy 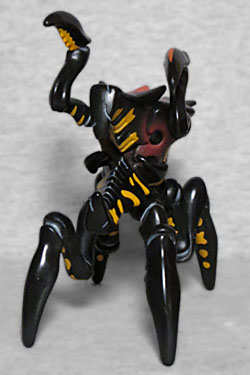 writing a novel (or lending his name to a game) that suggested the USSR or China was great, you know? But Heinlein not only wrote stories praising (small-C) communism, non-traditional families, revolution, and general liberal values, but also the borderline fascistic Starship Troopers, in which people who serve in the military are one of the few groups who deserve citizenship in their home land (and yeah, it's not at all concerning that used to be on US military "required reading" lists).

Starship Troopers introduced two major tropes to the world of sci-fi: powered armor and swarms and swarms of buggy aliens. (Three if you want to count soldiers being dropped into the battlefield via armored pods.) The 1997 movie dropped the armor but kept the bugs, creating a highly iconic movie monster in the process. There was a toyline at the time, but no one's touched the license since, and those old ones go for serious money nowadays. But here comes Funko with their "we will make EVERYTHING" philosophy, finally taking another crack at it.

There are seven different kinds of bugs in the movie, 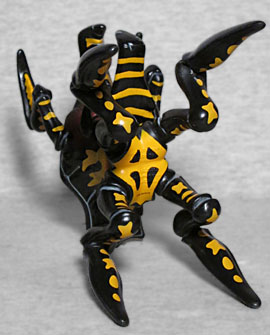 but the most ubiquitous is the Warrior. It's the standard ground-based infantry, swarming everywhere in the thousands. All the movie's creatures were designed by Craig Hayes, the same guy who designed ED-209 for an earlier Paul Verhoeven movie. It's got the jaws of a beetle - elephant, rhinoceros, hercules, take your pick. It's big pincers that look like they could cut someone in half. The big, scythe-like arms on the side of the head seem designed only to pull things into the mouth, and the colors are predatory: stripes on the body like a tiger or wasp, and a bloody stripe along the top surface. Even the belly gets dangerous apps. There's nothing round or soft about the design, so they look like they'd hurt you no matter what angle you come at them from. 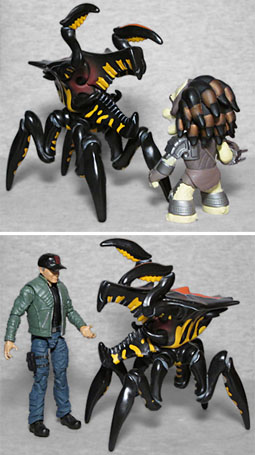 This is a POP!, so it has those usual black POP! eyes - but on a design like this, they're hardly a distraction. You'll barely even register they're there, even with a red airbrushing around them. There's no articulation, of course, because that's not how POP!s work; it's just "four feet on the floor, arms raised, mouth open." Because this is a standard-sized POP!, it does feel slightly small - the bugs are generally shown as being larger than a human, yeah? So this comes across like a baby (or "larva," if you will) if you try to compare it to human POP!s. You know what it does look good standing next to, though? My beloved Mystery Minis! Put this next to one of those, and suddenly it's a massive, scary monster that could eat someone in one bite. GI Joe would also work. Anything 1:18 scale.

We really hope someone some day does make a new, more affordable edition of the Starship Troopers Warrior Bug, because the movie's only come into its own more as the years have gone by, and the designs are toyetic. But until then, this Funko POP! version is a fine stand-in.