The early-mid-80s were rife with "friend" toys - Cabbage Patch Kids, Teddy Ruxpin, My Buddy/Kid Sister, the Good Guy doll, etc. Toys you didn't just play with, characters you palled around with. In 1986, American Greetings combined that category of toy with kids' usual love of gross things to create My Pet 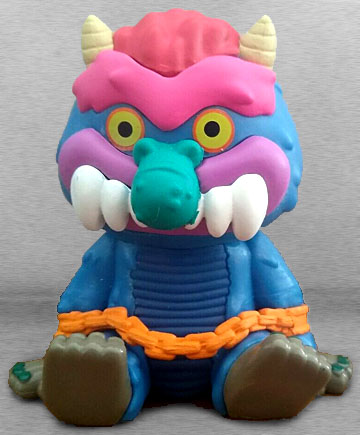 Monster, the sweetly scary compadre you could have spooky adventures with. Somewhere along the line the MPM intellectual property was acquired by Saban Brands, so Hasbro got that as part of the deal when they outright bought the Power Rangers from Saban. And since these Retro Toys Mystery Minis are all based on Hasbro products, My Pet Monster was a natural choice for inclusion.

The original Monster was available in a few different sizes, up to a massive 26" tall beast. To show his size in Mystery Mini form, he's sculpted sitting down, with his hands on the ground by his sides and his legs out in front of him. And yet he's still as tall as the rest of the Minis! The chain for his orange shackles runs across his lap. This is clearly the vintage MPM, because the 2001 version had a much smaller nose, bigger eyes, and teeth that were supposed to look like a smile. No thank you! 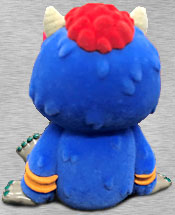 and the like, rather than Target or Hot Topic) included a variant My Pet Monster. It's the same sculpt, it's just been flocked so it's fuzzy. The chain, nose, teeth, hands, and feet remain bare plastic, with the flock being used for his two-tone blue body, his purple muzzle, his pink eyebrow, and his red hair. Even the eyes had to be flocked, because they're just painted on the normal figure.

Both versions of the My Pet Monster Mystery Mini are available in a 1:24 ratio, so you're not guaranteed to find one in every case. Boo!