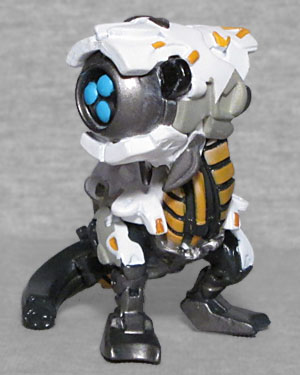 This happy little fellow is a Watcher, the first machine Aloy encounters in Horizon Zero Dawn. It's a compact, inquisitive, and agile recon unit that will attempt to swarm a target in numbers. Basically, it acts as a sentry for other, larger machines - it spots the player, sounds the alarm, and then does some quick attacks while the bigger beast spins up its attack. You know, the starter enemy.

The Watcher is a bipedal creature 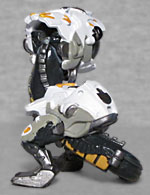 with a long, blunt tail and a cluster of three eyes in the center of its head - they're blue, meaning it's peaceful, not yellow (wary) or red (angered). It's posed twisting to the side, like it just heard you step on a twig or something. The outer white armor plating has a few colorful bits - wires and flaps and such - and there are yellow panels running down the throat, under the grey belly armor, and along the bottom of the tail. The feet don't rest flat, because the tail is just high enough off the ground to make the Watcher tip backwards slightly so it can become a sturdy tripod.

All the HZD Mystery Minis were packed in the same 1:12 ratio, but there was no set layout to the case - you just had to try and guess what you were getting by how much space it seemed to take up in the box.