The original 1981 Castle Wolfenstein was a top-down stealth game, 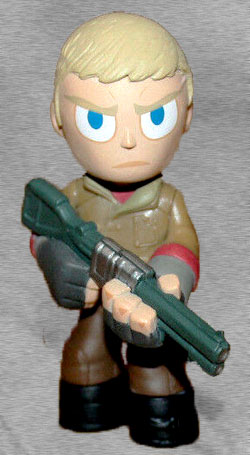 as was its sequel, Beyond Castle Wolfenstein. When id Software bought the rights to the IP, they turned Wolfenstein 3D into the formative cornerstone of the first-person shooter genre. As a FPS, the only thing we would normally ever see of the main character would be his hands; but to help display the player's health level, the HUD includes a sprite of a human face that gets more bruised and bloody as you take damage; that's the face of Polish-American Jew William J. Blazkowicz, "the Allies' bad boy of espionage and a terminal action seeker."

But there's no such thing as a "Best of id Software" Mystery Minis series, so obviously this BJ Blazkowicz is based on the 2014 reboot series (New Order/Old Blood/New Colossus), which was developed by a company called MachineGames, but was published by Bethesda. Which is why you could find this plain looking soldier in the bottom front right corner of the Best of Bethesda box, right next to the Keeper. 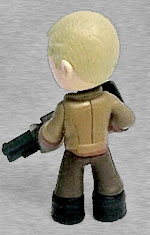 BJ is posed holding a shotgun across his body, and looking sternly to the side. The cutesy Mystery Minis style mean he can't have his Til Schweiger good looks, but shouldn't he at least have his scars? His pants and jacket are different shades of brown, and his shirt is red (judging by the visible collar and sleeves. He's wearing fingerless grey gloves, and for some reason his gun is green.

The vintage design had brown hair, but Wolfenstein: The New Order took a cue from Captain America, making him blond and blue-eyed to subvert the Aryan stereotypes.

After the war, BJ Blazkowicz married and eventually had a son named Arthur. Arthur became a newscaster and talk show host, and changed his name to the more TV-friendly "Arthur Blaze." He still loved his father, though, so when he had a son of his own, Arthur named the boy after his WWII hero granddaddy. But surely the story of Billy Blaze will never be important in the future...

This entry was posted in Funko and tagged Doom, Mystery Minis, Wolfenstein. Bookmark the permalink.