Remember last year, when the Four Horsemen surprise-announced their Figura Obscura Krampus? Well they're doing it again, as revealed in an out-of-the-blue email yesterday:

Much time has passed since the mysteries known as the Figura Obscura were seen, but the shadows have begun to stir once again. A chill fills the air as October rolls in, and with it comes new surprises.
Are they tricks...or are they treats? The key is to be ever vigilant, loyal Legionnaires, for Figura Obscura rides tomorrow morning

While no one could have predicted the Krampus, the fact this one says "rides again" provided a pretty clear clue. And sure enough, it's the Headless Horseman! 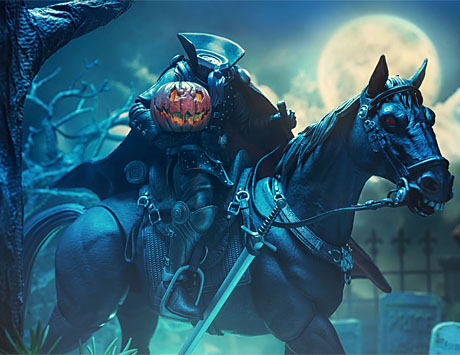 It's made from Mythic Legions parts, with a few new bits to capture the classic look, and as of this posting, it's not sold out yet (though the "all in" bundle with a pin and mug is). If it does go before you get a chance to place your order, there will be a second drop tonight at 8pm EST. This isn't a preorder; the figure is already in stock and ready to ship in a few days, so get the two-pack for your Halloween display now!