So in today's review, we had a bit of fun pretending that NECA's Ultimate King Kong (Illustrated edition) was not really from our world, but from another, with the main "evidence" being the lack of copyright information on the packaging and the fact that the claims of the design being influenced by the film's poster didn't seem to hold water. 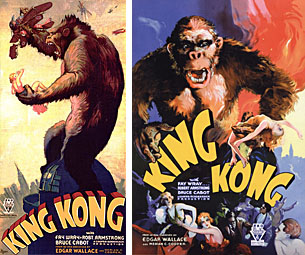 But that was short-sighted on our part. As one of our readers, Matt Catania, pointed out, NECA's promotional copy never specifies the movie poster, it simply says "the classic poster illustration" - thus, it could have been any poster. 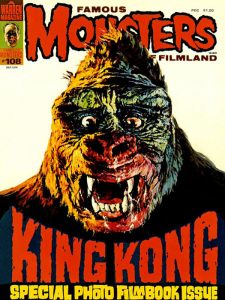 That is the cover to Famous Monsters of Filmland #108, from spring of 1974. The art, by Basil Gogos, seems pretty clearly to be a direct influence on the figure. And it's entirely possible - nay, even likely - that cover was sold as a poster at some point, meaning NECA wasn't wrong about their influences. They were just expecting us to be intimately familiar with every poster of King Kong that's ever been produced in the history of time. (Trust us, you do an image search for "King Kong poster," that doesn't come up anywhere in the first few hundred results. NECA would have been more accurate saying "a" classic poster, not "the" classic poster.) 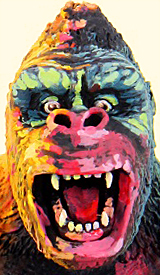 The toy's paint apps are different enough from the magazine cover that they probably didn't have to pay any sort of licensing fee for that (a guess surely helped by the fact that they promoted it as based off a poster, not mentioning the magazine at all - after all, if the front of a Back to the Future box can look like a Sports Almanac, the front of this box could easily have copied the layout and typography of the Famous Monsters cover), but the lack of any copyright info about the toy is still a bit sus.

This entry was posted in addendums, commentary, NECA and tagged King Kong. Bookmark the permalink.